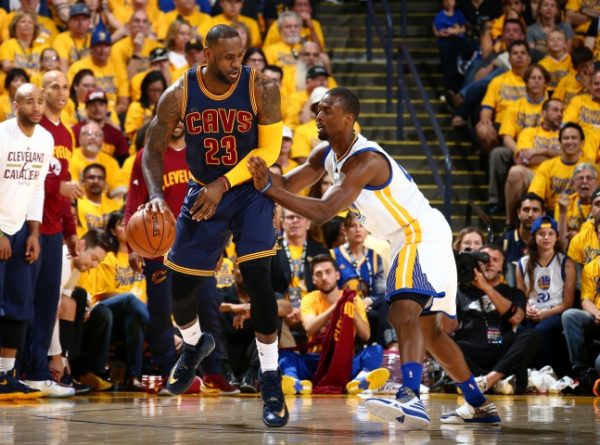 (Oakland, CA) – The combination of a disastrous third quarter by the Cleveland Cavaliers and an inability to stop Golden State Warriors forward Draymond Green was deadly to the Cavaliers during a 110-77 loss in Game 2 of the NBA Finals on Sunday night at Oracle Arena.

The loss now puts the Cavs in a 0-2 deficit in the series, with the next two games shifting to their home court at Quicken Loans Arena on Wednesday night.

After Cleveland scored the opening basket to start the second half to make it 52-46 in favor of Golden State, the Warriors continued to push the lead up until heading into the fourth with an 82-62 lead. The key factor was its 65 percent success rate on its shot attempts. Any chance of a comeback by the Cavs in the final period was then quickly ended after Golden State scored the first seven points.

“We’ve got to be better at all facets of the game,,” LeBron James said after the contest. “Both offensively and defensively, both physically and mentally. We didn’t win anything.”

Green finished with 28 points and was especially deadly from beyond the 3-point line, hitting 5-of-8 from long range.

“The guy made shots in our face,” James said. “He made some big plays both offensively and defensively.”

For Cleveland, James had a team-high 19 points, also handing out nine assists and grabbing eight rebounds. Reserve Richard Jefferson ended with 12 points and five rebounds, while Kyrie Irving finished with 10 points, though only six after the game’s opening minute. Tristan Thompson finished with eight points and five rebounds, with all but one of the rebounds taking place during the first quarter.

“Tonight we had a great first quarter, but they were tougher and more aggressive than us,” Lue said.

The Cavaliers ended that first quarter leading 21-19, but still struggled on the offensive end, shooting just 32 percent for the period. In addition, they were on the short end of an 18-10 Golden State advantage on the boards. The key reason they were able to hold an advantage was their ability to force six turnovers.

“We have to be tougher and live with the results,” Cavs head coach Tyronn Lue remarked. “It isn’t anything mental, we just have to play better.”

In the second period, the Cavs took their biggest lead of the half at 28-22 after a James dunk. However, that sparked a 20-2 run by the Warriors, including nine unanswered points to get things started. In the midst of all this, Cleveland missed eight straight shot attempts.

The Cavaliers then appeared to be making a comeback by scoring five unanswered points, but Golden State answered with a 10-2 run to make it 52-37 with just over two minutes left before intermission. By halftime, the Cavs were able to chop seven points off that deficit to make it 52-44 and looked to have some momentum. However, that turned out to be a mirage.

“It’s hard for me to pinpoint what’s going wrong, especially offensively,” James commented. “When you’re behind these guys, they’ll make you pay for it every time.”

Late in the first half, Kevin Love sustained a hit to the back of the head during a play in the paint. Early in the second half, dizzy spells sent him to the bench and then soon to the locker room. He was placed in the league’s concussion protocol, with his status as unknown for Wednesday’s Game 3.

“At halftime, he showed no symptoms (of a concussion),” Lue said. “But during a timeout, he looked woozy and we had to get him out.”