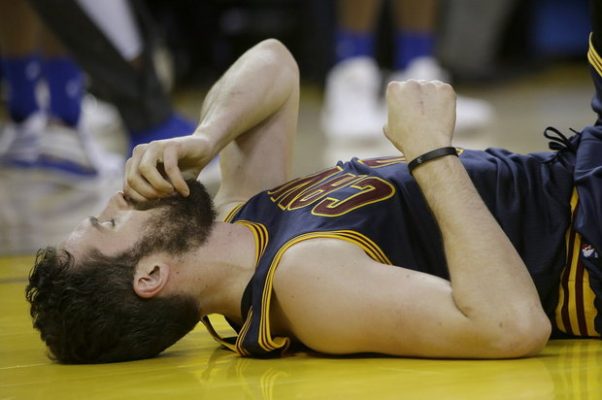 After suffering a Harrison Barnes elbow to the back of the head in Sunday’s Game 2 of the NBA Finals, Kevin Love’s status for Game 3 in Cleveland Wednesday is still uncertain, according to Cleveland Cavaliers head coach Tyronn Lue.

Love entered the league’s concussion protocol in the second half of Sunday’s 110-77 loss to the Golden State Warriors. After the initial blow, which came with approximately five minutes left in the second quarter, Love originally stayed in the game and continued to play into the third quarter.

That is when he reportedly starting feeling some dizziness and removed himself from the game.

“When we came back out in the third quarter, I could see in a timeout he looked kind of woozy,” Lue said in the postgame. “He went back on the floor for a second, and then we had to get him off the floor.”

Upon returning to Cleveland, Love did not practice with the team Tuesday morning. According to NBA.com, Love is still in the concussion protocol, which calls for several tests before a player can return. Love will not be able to play in Game 3 unless he is symptom-free and can pass tests that meet baselines he established in preseason testing.

If Love is unable to play, Lue indicated that veteran center Timofey Mozgov could see some time on the floor. Mozgov has played just 14 minutes in two games so far.

“Timo has to be ready,” said Lue. “There’s a chance and opportunity for him to play, we’ve talked about that as a staff. He just has to be ready, and we’ll see what happens from there.”

The Cavs will need to find a quick answer, as they currently trail the Warriors 2-0 in the NBA Finals. Luckily, Cleveland returns home for Games 3 and 4. Unfortunately for the Cavs, out of the 31 times a team has taken a 2-0 series lead in the finals, that team has gone on to claim the Larry O’Brien Trophy 28 of those times.

“History is made to be broken,” said Lue. “So we’re not worried about being down 2-0. It’s not over until a team wins four games, we know that. We just have to execute. When we have a chance to get on the break, we have to convert. We have to take advantage of missed shots. We have to take care of the basketball a little better.”