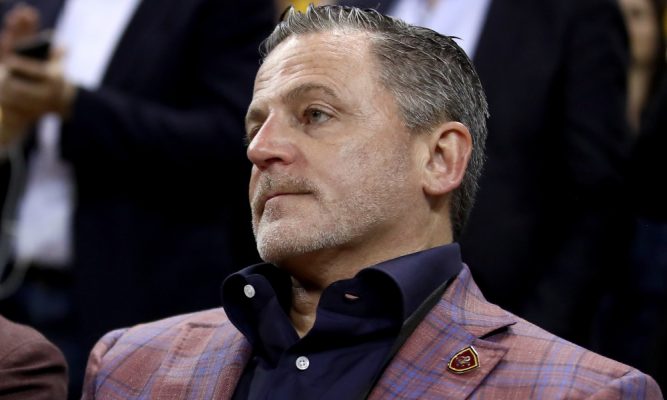 The Cleveland Cavaliers’ collapse this season has once again put the focus on team owner Dan Gilbert’s effort to rebuild the franchise following the departure of LeBron James. The possible trade of veteran forward Kevin Love is one option that was scoffed at by an unnamed Western Conference executive.

Ken Berger of BleacherReport.com looked at a potential Cavaliers’ deal for Love, and offered that executive’s ridicule of Gilbert.

“The problem is: You have a rookie GM (Koby Altman)—who’s a really good guy and has done some really good things and is trying to prove himself. And you’ve got a delusional owner [Dan Gilbert],” a Western Conference executive said. “And they’re going to think they’re supposed to get something for the guy. You’re not getting an asset for him under any circumstances.”

The executive also spoke about the issues of Love’s age (30), his injury history, and his huge contract extension that kicks in next season. All three factors, in his opinion, are key reasons why the Cavs shouldn’t expect much in any deal for the veteran.

“It’s a lot to ask someone to take on $144 million for a 30-year-old with an injury history,” he said. “You’re dealing with a very small, narrow marketplace for him.”

Love does offer a team a player who can deliver a double-double performance in each game he plays. Whether or not that team wants to deal with the negatives connected with such value is open to question.

The executive also noted how Love’s style of play diminishes his trade value.

“How many teams are really looking for a dinosaur face-up 4-man, or a 5 who can’t switch pick-and-roll?” the exec asked.

The Cavs’ woes this season mark the second time that the team has fallen apart following the departure of James in free agency. Prior to James leaving last July, some reports indicated that Gilbert was looking forward to rebuilding the team without the future Hall of Famer.

That philosophy is likely one that he may be having second thoughts about as the team heads toward this offseason looking at a lottery pick instead of another possible trip to the NBA Finals.