Don't Miss
Home / Media / Kyle Lowry to LeBron James After Game 6: ‘You a Bad Motherf’er…Go Win It All’

Kyle Lowry to LeBron James After Game 6: ‘You a Bad Motherf’er…Go Win It All’ 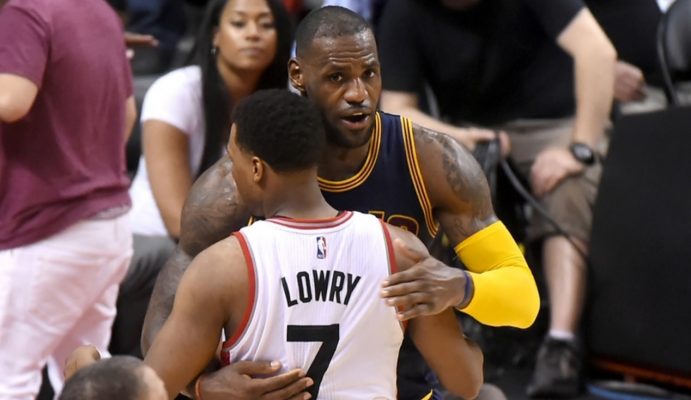 The respect shown to the Cleveland Cavaliers’ LeBron James by Toronto Raptors guard Kyle Lowry in the final moments of the Cavs’ clinching victory in Game 6 of the Eastern Conference Finals, not only included a congratulations but also some motivation for the upcoming NBA Finals.

“I said to LeBron, ‘You a bad motherf’er,’ and I told him to go win it all.” Lowry said. “I’ve always had mutual respect for LeBron. We have a good relationship, and like I said I just appreciate all the effort and hard work he puts in and just that competitive nature of two competitive athletes going at it. I’m happy for him because he gets another opportunity (in the NBA Finals), but I’m disappointed that we’re not having that opportunity.”

Lowry attempted to keep James from reaching those finals with a 35-point performance in Game 6 that included 15 points in the last three minutes of the third quarter.

For the Cavs, James was the key component in the Cleveland 4-2 series victory, averaging 24.6 points, 8.6. rebounds and 7.0 assists. Numbers like that didn’t escape the eye of Lowry.

“That’s what he does,” Lowry said. “He’s LeBron James, a top-five player in the history of the NBA once he retires.”

Returning the compliments in postgame remarks, James also noted the contributions of Lowry’s backcourt mate, DeMar DeRozan. In addition, James heaped praise on the Raptors home crowd for their avid support of the team.

“What those two guys have done for this franchise and this city and this fan base is nothing short of amazing,” James said. “Being two All-Stars and carrying this team through a first-round, seven-game series and a second-round series and then a conference finals Game 6 in their home building, they were spectacular. They were great. These fans here, I know they know what they have, and they sure appreciate talent like DeMar and Kyle, so it was fun competing against them.”

The Cavaliers will face either the Golden State Warriors or Oklahoma City Thunder beginning on Thursday. Those two teams will decide the Western Conference title in Game 7 on Monday Night at Oracle Arena in Oakland.