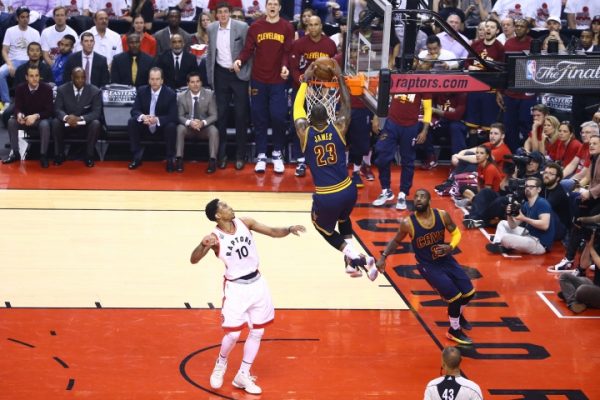 (Toronto, ON) – The Big 3 of LeBron James, Kyrie Irving and Kevin Love combined for 83 points as the Cleveland Cavaliers closed things out to capture the Eastern Conference title with a 113-87 victory over the Toronto Raptors at Air Canada Centre on Friday night.

“We wanted to approach this game like this was our Game 7 and we didn’t want to leave anything to chance,” Cavaliers head coach Tyronn Lue said.

Cleveland relied almost exclusively on its starting lineup to win this closeout game, with only Tristan Thompson playing less than 35 minutes. The remaining four starters, led by James, combined to score all but 15 of the Cavs’ points.

“It’s taken everything, with all the things we’ve dealt with,” Irving said after the game. “It’s special to do it with these guys.”

James and Love ended the night with double-doubles. James had 33 points, 11 rebounds and six assists, while Love contributed 20 points and 12 rebounds. Meanwhile, Irving came close with 30 points and nine assists.

“He (James) is a proven winner and he’s shown that throughout his career,” Lue said. “To make six straight finals is amazing.”

J.R. Smith was the only other Cleveland player in double figures with 15 points, all of them coming on three-pointers.

“I knew this was going to be tough and that I had to bring my game,” James said. “We’ve covered a lot of ground and I still believe that we can do better.”

The Cavaliers looked in complete control of the game in the third quarter, building their lead up to 21 points, but the Raptors’ Kyle Lowry scored 15 points in the final three minutes of the period to slice the margin to 12 at 86-74 entering the fourth quarter.

Still, the lead never got below double digits as the Cavs were able to find an answer each time a Toronto surge began. A 14-3 run that began early in the fourth quarter cemented the victory and sent Cleveland to its second straight NBA Finals.

“We’ve grown throughout this entire season,” Love said. “We know we have a lot of work to do, but we’re going to enjoy this one tonight.”

Unlike their two previous games, it was the Cavaliers who controlled the pace during the first half, taking multiple double-digit leads and clamping down on its defense when the Raptors threatened. Combining good ball movement (13 assists) with strong three-point shooting (10-of-15) during the opening two quarters, they headed to the halftime locker room leading 55-41.

“We needed LeBron to set the tone for us early and he did that,” Lue said. “Then Kyrie and Kevin brought it home.”

Physical play marked much of the first half, with two moments standing out. The first came with 3:18 left in the first quarter when Toronto’s Bismack Biyombo was assessed a Flagrant 1 foul after his elbow smashed into Love’s jaw. Had the series been extended to Game 7 on Sunday night, Biyombo would likely have been suspended for the contest.

That was followed in the second period by the Raptors’ other center, Jonas Valanciunas, getting tagged for a technical after elbowing Richard Jefferson. In the immediate aftermath of that, Jefferson and Toronto’s Patrick Patterson were also assessed technicals.

“I’m so proud of those two guys (Irving and Love), they worked their tails off to get back,” James said. “Big time performance and big time leadership by those guys.”

The Cavaliers will now wait to see who their opponent in the finals will be, with Game 6 of the Western Conference Finals between Oklahoma City and Golden State set for Saturday night. The Thunder lead 3-2 in the series. If Oklahoma City wins, the finals will begin at Quicken Loans Arena next Thursday night, but if the Warriors win both Saturday and Monday night’s Game 7, the Cavaliers will start the series at Oracle Arena in Oakland, also set for next Thursday night.