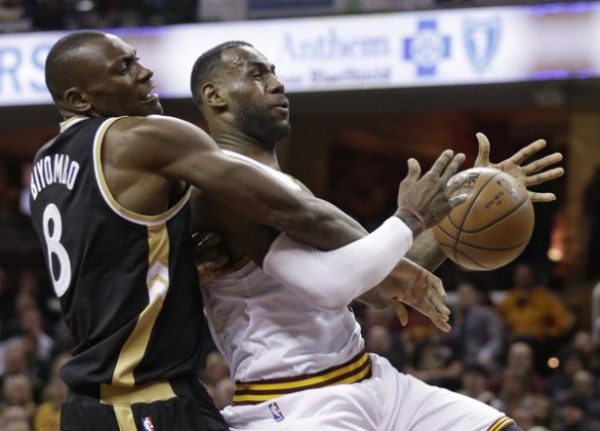 Despite being on the receiving end of a 115-84 loss on Tuesday, the specter of trying to beat LeBron James and the Cleveland Cavaliers in the Eastern Conference Finals doesn’t appear to intimidate Toronto Raptors center Bismack Biyombo.

Having taken over for injured Raptors center Jonas Valanciunas, Biyombo was asked by Raptors beat writer Josh Lewenberg if he fears James. Lewenberg tweeted out Biyombo’s response, which also included his comment to teammate Kyle Lowry.

Is Biyombo afraid of LeBron? "No I'm not & I will never be. I'm never afraid of human beings. I always joke with Kyle, I'm afraid of lions"

Cleveland fans may not be as inclined to find it as humorous, given three different plays from Tuesday night that could have been viewed as possible flagrant fouls. The first came during the opening half, when James took a Biyombo elbow to the back of the head. After intermission, James was actually called for an offensive foul after getting hit in the face by Biyombo. In addition to those two incidents, Biyombo also found time to knock down Tristan Thompson as the latter was going in for a layup.

Biyombo, James and Thompson will all be back on the Quicken Loans Arena court for Thursday night’s Game 2, with the scene shifting to Toronto for the next two contests beginning on Saturday night.