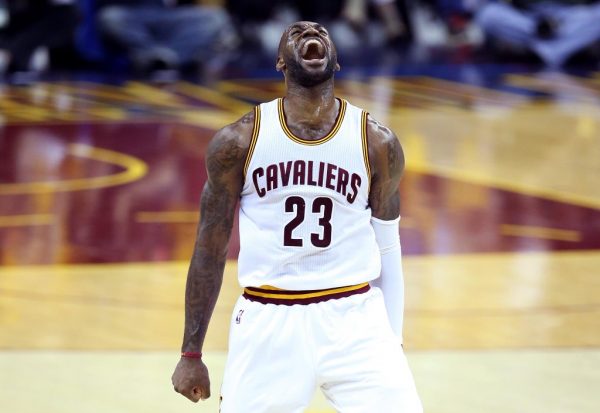 (Cleveland, OH) — The Cleveland Cavaliers stayed undefeated on Tuesday night as LeBron James and company overcame a slow start to put a 115-84 beatdown on the Toronto Raptors in Game 1 of the Eastern Conference Finals at Quicken Loans Arena.

James started out a staggering 9-of-9 from the field, as the Cavs shot a whopping 67 percent in the first half. The two-time NBA champion made it look easy, going a ridiculous 11-of-13 for 24 points, six rebounds, four assists and two steals in only 28 minutes of play.

“Our attention to detail was there for 48 minutes and I’m totally satisfied with that, so we’ve got to continue to do that in Game 2,” James said.

Point guard Kyrie Irving led a balanced scoring barrage with 27 points (11-of-17 from the floor), five assists, two steals and two blocks, while power forward Kevin Love had a solid night (4-of-8 from the field, including 2-of-4 from deep) with 14 points and four boards.

Although the Cavs did a massive amount of damage from behind the arc when they made 77 3-pointers in their sweep of the Atlanta Hawks, the Cavs took advantage of Toronto in the paint on Tuesday night.

“Tonight we were able to get downhill, get to the basket and get a lot of layups,” said Cavs head coach Tyronn Lue. “They didn’t collapse as much as previous teams have, so we take what the defenses gives us.”

Standout point guard Kyle Lowry, who exploded for 35 points in the Raptors’ Game 7 win over the Miami Heat on Sunday afternoon, was held to just eight points on Tuesday night.

The Cavs’ swarming defense made life absolutely miserable for Lowry and his teammates, as the Raptors went a stretch in the second quarter where they didn’t get a field goal until 6:28 remaining.

However, the Raptors shaped up enough for a bit to close the gap to within 12 before the Cavs blitzed them yet again, as Cleveland led Toronto 66-44 at halftime.

“They’re a very good team,” Raptors head coach Dwane Casey said. “They’re at the top of their game. But we’re both here for a reason. Nobody gives us a chance. So there shouldn’t be any pressure on our guys.”

Up next, the Cavs will look to keep the momentum going on Thursday evening in Game 2 of the Eastern Conference Finals. The contest, which is scheduled to tip off shortly after 8:30 pm ET at Quicken Loans Arena, will be broadcast live nationally on ESPN.