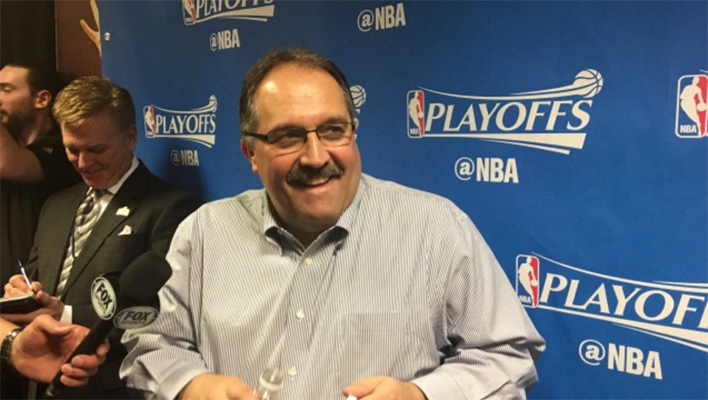 Trying once again to reinforce the perception of Cleveland Cavaliers forward LeBron James as someone being protected by officials, Detroit Pistons head coach Stan Van Gundy continues to try and make his case through the media as the two teams get ready to resume their series on Wednesday night.

After complaining during Sunday’s 106-101 loss to the Cavaliers about how officials allow James free reign on the court without fear of being called for charging, Van Gundy shows no signs of veering away from such talk. Rod Beard of The Detroit News passed on the latest Van Gundy remark via a tweet:

#Pistons SVG on drawing charges on LeBron: "It was pretty clear the other night that it was impossible to do."

Van Gundy’s previous remarks resulted in a $25,000 fine, but he’s hoping that the loss of money will simply be a down payment on officials keeping James in line.

On Tuesday, James had no interest in getting involved in a war of words, dismissing both Van Gundy’s previous comments and those of Pistons rookie forward Stanley Johnson.

The possibility of Van Gundy ramping up such comments this weekend exists, since the series shifts to Detroit’s home court for games on Friday and Sunday night.