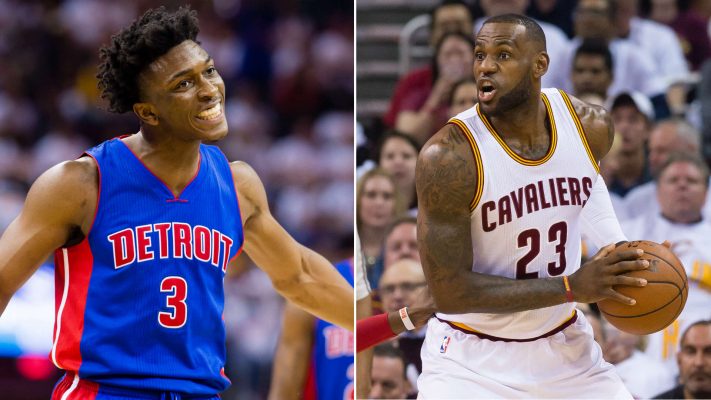 Despite controversy that seems to be geared toward trying to draw the Cleveland Cavaliers’ LeBron James into a psychological battle of wills with Detroit Pistons head coach Stan Van Gundy and rookie forward Stanley Johnson, James has indicated that he’s simply focused on helping his teammates win three more games and advance in the NBA Playoffs.

Chris Haynes of Cleveland.com noted that James was more amused than upset about the comments made about his perceived image as being above the rules.

“The game is won in between the four lines,” he said. “Whatever that game presents itself, at the end of the day, it’s not about me versus Stanley Johnson, or me versus Stan, it’s Cavs versus Pistons. I’m trying to help this team advance and get another home win so we can protect home. Listen, I’m 31 years old, man. I don’t get caught up in any shenanigans.”

It was during a timeout in Sunday’s Game 1 matchup when Van Gundy criticized the game’s officials for what he considered preferential treatment toward James, comments that resulted in a fine of $25,000 by the league office:

“LeBron is LeBron. They’re not going to call offensive fouls on him, he gets to do what he wants.”

Johnson also attacked James’ physical play, specifically noting a second-quarter play in which he was called for a foul after he indicated that he was pushed to the ground by James.

“I’ve never had a person grab my jersey and try to throw me to the floor and I come up on the wrong end of things like that,” Johnson said. “That kind of woke me up a little bit, and from that point on, it was like ‘It’s on.’ If you want to foul, we both can go to the floor next time. That’s how I took that.”

James didn’t sound terribly concerned about those specific comments, first indicating that he had no plans to adjust the way he plays:

“It doesn’t stop me from (playing),” James remarked. “I would never change my game no matter what a player or a coach says. For me, my main thing is how I can help my team get a win, how I can go out and put an imprint on the game and play as hard as I can and I’ll live with the results. I think it’s a non-issue. He’s going to say what he has to say to try to get an advantage for his team, but at the end of the day, the game is played in between the four lines and that’s all that matters.”

Some media outlets also pointed out that Van Gundy-coached teams (Miami, Orlando, Detroit) have had their share of success when facing teams with James on them, specifically the 2009 Eastern Conference Finals, when the Orlando Magic defeated the favored Cavaliers in six games. However, James isn’t concerned.