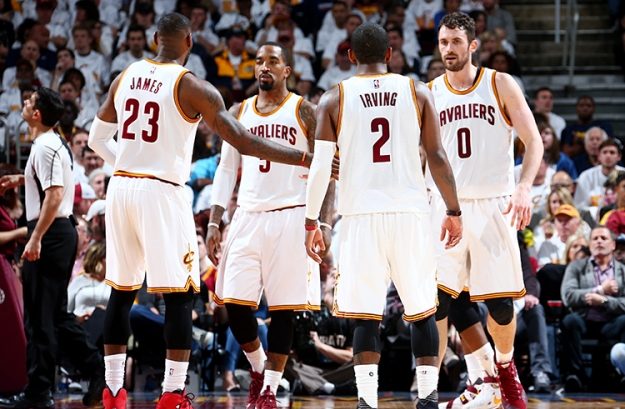 (Cleveland, OH) – Behind 81 points from the Big Three of Kyrie Irving, Kevin Love and LeBron James, the Cleveland Cavaliers were able to outlast the Detroit Pistons, 106-101, in Game 1 of the first round of the Eastern Conference playoffs on Sunday afternoon.

Irving led all scorers with 31 points, adding six assists and five rebounds. However, Love and James each collected double-doubles on the day, with Love’s 28 points and 13 rebounds working in tandem with James’ 22 points and 11 assists. Just four other Cleveland players accounted for the team’s remaining 25 points.

“That’s what you should expect for the three leaders on the team,” Irving said immediately after the game. “During the playoffs, it can be anybody’s night, but we don’t want to discredit the guys that came in and still gave us a lot of life on the defensive end.”

The contest saw 17 lead changes and 21 ties, but after the opening minute of the fourth quarter, the Cavaliers trailed 83-76 and looked to be in danger of dropping the opener of the seven-game series. Momentum shifted though when Cleveland forged a 12-2 run, sparked by a three-pointer from reserve Richard Jefferson.

Speaking about Jefferson’s clutch three, as well as another basket by the veteran a short time later, Cleveland head coach Tyronn Lue spoke of the need for a team effort to be the mindset:

“I thought we got down and made some big shots, and in the playoffs, everyone has to be ready and step up,” Lue said.

The Cavs finally took the lead for good on a Love three-pointer with 5:40 remaining. Irving then helped put the game on ice in the final minutes, scoring seven points—five of them from the free throw line.

“There were a ton of mistakes we made out there, but a win is a win,” Irving said.

Irving had opened the third quarter with eight straight points, which James saw as a testament to Irving’s leadership potential:

“We’ve had horrible third quarters this year, but Ky wouldn’t let it happen,” James said. “He kept control of the game.”

One reason for the Cavs’ struggles during the first half were problems defending the Pistons, with Detroit hitting on 62 percent of their shots. The Pistons were especially lethal from beyond the three-point line during those quarters, connecting on 10-of-16 attempts. After the break, they cooled off to 41 percent and were held to 43 points.

Two major positives for the Cavaliers could be seen in the 25 assists they handed out during the game while only committing three turnovers.

“Our plan for this series is to be aggressive and attack,” Lue said after the game.

The two teams meet again on Wednesday night at Quicken Loans Arena in a contest that will tip off just after 8 p.m. ET. The game will be broadcast nationally by TNT.