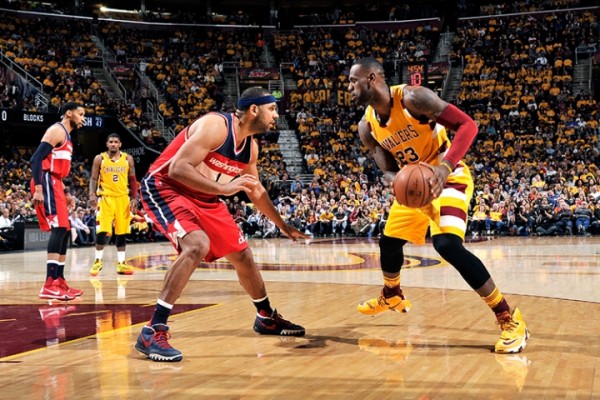 (Cleveland, OH) – Three first-half runs gave the Cleveland Cavaliers a double-digit cushion that they continued to expand upon as they routed the Washington Wizards in a 108-83 victory in Friday action at Quicken Loans Arena.

The first quarter saw an 11-3 run midway through the period, which was followed by two more surges in quarter number two that served as perfect bookends. The first was a 13-6 boost in the first five minutes and a 17-7 push in the final five minutes closed out the half to make it 59-42.

The Cavaliers chose to sit out Kevin Love, given the back-to-back contests on tap this weekend. However, his absence wasn’t an issue as Cleveland led for virtually the entire contest, holding a fourth quarter lead that reached 30 points. The win helped improve the Cavs’ season mark to 43-17.

“We’ll go with Kevin tomorrow, but we’ll mix it up the rest of the game.”

LeBron James also saw some positives in the new look:

“It worked in our favor tonight,” James said. “We were able to play some efficient ball.”

Two of the keys for the victory were the combination of only nine turnovers and excellent ball movement, which resulted in 24 assists for the contest.

Kyrie Irving gave some insight into what made the team click:

“We showed our versatility tonight and our pace was unbelievable.”

James paced the Cavaliers with a double-double with 19 points and 13 rebounds, while adding seven assists. Irving put up similar numbers, including a game-high 21 points, as well as eight assists and five rebounds.

Irving also spoke about how he and James were able to remain in sync during the game:

“Having him being able to be the creator sometimes, I’m able to ease into the game,” Irving said. “Giving possessions to him, I can be on the back side and get some open shots.”

Lue spoke about Cleveland’s potential with the faster pace down the stretch:

“When we’re able to spread the floor, we have the potential to be lethal,” Lue said. “We just have to continue to work on it and get comfortable.”

James stayed focused on making sure the team showed improvement each game:

“We have 22 games left and we want to get better,” James said. “We did that tonight.”

The Cavaliers don’t have much time to bask in the victory, with the Boston Celtics set to again take the court at Quicken Loans Arena. It will be exactly one month from the last time they met, when the Celtics stunned the Cavaliers in the final five seconds to win, 104-103. Tipoff for Saturday’s contest will come just after 7:00 p.m.