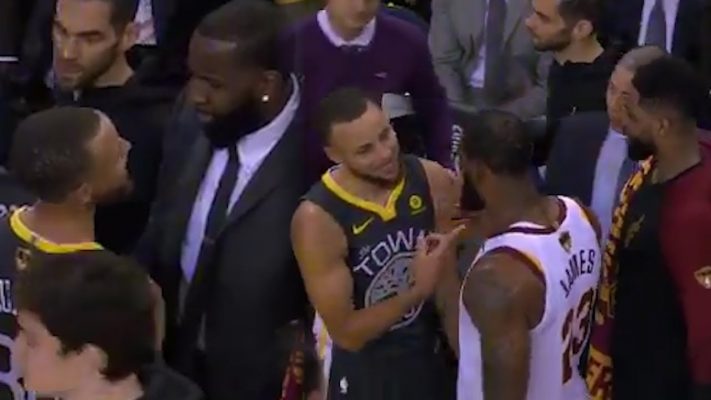 The Golden State Warriors’ Stephen Curry blew up in the fourth quarter to lead his team to a 122-103 win Sunday. The 2018 NBA Finals series is now at 2-0 in favor of the Warriors, whose lopsided win over the Cleveland Cavaliers in Game 2 was due in large part to Curry’s explosion in the final quarter.

Unfortunately for Cavs fans, the 6-foot-3 point guard’s huge game may have been in response to his altercation with Kendrick Perkins earlier in the game.

Steph and Perkins were getting into it. ?

Curry attempted a three in the left corner as the clock was winding down in the third quarter with the Warriors ahead 90-80. As Curry’s momentum carried him toward the Cavaliers bench, his legs got tangled with Perkins. The Warriors guard took exception, it seems, to Perkins not moving his legs out of the way which could have caused Curry to fall or get injured.

The two jawed at each other before other players and coach Tyronn Lue broke up the heated conversation. Even LeBron James had some words for Curry as he was trying to calm the situation down.

Curry was upset that Perkins didn't move his legs out of the way pic.twitter.com/gCwhOygFS4

When informed of the fact that Perkins didn’t move his legs away after the two-time MVP shot a three-pointer, Curry told ESPN via Chris Haynes that he had no interest in blowing up the situation.

As if in response to his confrontation with Perkins, Curry erupted for 16 points, including 5-for-5 from three-point range in the fourth quarter. He had a game-high 33 points and a Finals record nine 3-pointers after the final buzzer sounded.

Cavaliers players should hope that Curry’s hot-shooting in Game 2 doesn’t carry over into Game 3 when the series shifts to Cleveland on Wednesday.