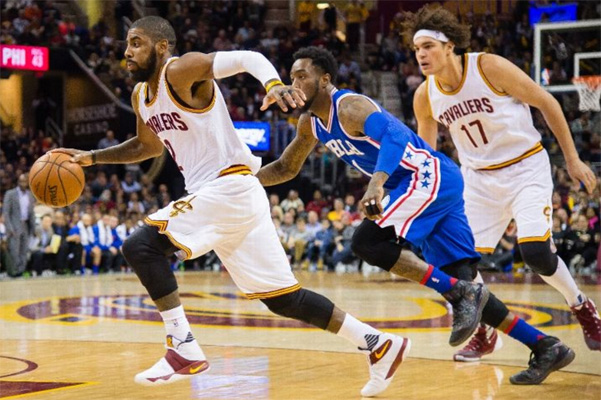 (Cleveland, OH) – Fueled by a second-quarter eruption that saw them outscore their opponents 34-13, the Cleveland Cavaliers collected their fifth win in a row with an easy 108-86 victory over the Philadelphia 76ers at Quicken Loans Arena on Sunday afternoon.

The Cavaliers’ suffocating defense played a major role during that second quarter domination, holding the 76ers to just 19 percent shooting on field goals and forcing them into 10 turnovers. After three minutes of action following halftime, any remote thought of a comeback by Philadelphia was eliminated as Cleveland took a 67-43 lead.

By the end of the third period, the Cavaliers, who improved their season record to 18-7, had moved the margin up to 28 at 88-60, with Cleveland leading by as many as 35 at 100-65 with 7:37 remaining. Once the bench was emptied, Philadelphia was able to get the final deficit down to a somewhat more reasonable margin.

Cavs head coach David Blatt spoke about the difficulty of staying focused against a team that fell to 1-28:

“You never want to underestimate an opponent and they’re going through a particular period right now,” said Blatt. “I like that we came out in the third quarter to finish the game and we did.”

LeBron James led the way during that second-quarter push by notching 11 points, a number which might have been slightly higher had he not made an effort to feed Kyrie Irving for an easy basket with just under nine minutes left before intermission.

Irving was playing in his first game since fracturing his kneecap in Game 1 of the NBA Finals last June. Receiving a roaring ovation when he was introduced, he struggled early to shake off the rust of such a long layoff, missing his first five shots before the layup.

Asked about his assist to Irving, James admitted the feed wasn’t his first thought:

“I was actually on my way to the rim,” said James. “But I knew he was struggling and the easiest way to get back is with a layup.”

After that shaky beginning, Irving connected on 5-of-7 for 12 points and four assists in just over 17 minutes of play. His fellow point guard Matthew Dellavedova had a season-high 20 points, bolstered by four three-pointers.

Dellavedova spoke about the improvement in his three-point shot:

“I worked on trying to quicken my release up,” said Dellavedova. “I didn’t change anything, I just kept getting used to the three-point line.”

Irving was asked after the game about his emotions surrounding the return and the reason for his early shooting:

“It felt amazing just being back out there with my brothers,” said Irving. “The minutes restrictions kind of put some pressure on me to score.”

Despite acknowledging that he’s still not quite at the level he wants to be, Irving was still excited:

“I’m just trying to get my rhythm back,” said Irving. “You have no idea how much I’ve been looking forward to this.”

Blatt spoke about the plan of attack as it related to Irving:

“We had a specific idea exactly how much we wanted to play him,” said Blatt. “He came out looking good and feeling good. I was truly happy to see him out on the court”

James led all scorers with 23 points in just over 25 minutes, adding five rebounds, four assists and three steals to his season totals.

In the midst of Cleveland officially putting the game away late in the third quarter, Blatt was assessed a technical foul for arguing over a foul against Kevin Love:

“I thought it was a flagrant foul that wasn’t called,” said Blatt. “Obviously, they disagreed.”

The Cavaliers will have one more home game on tap for 2015, when they host the New York Knicks in a game set to tip off just after 7 p.m. ET. Then, the team embarks on a four-game Western road swing beginning with the long-awaited Christmas Day matchup against the Golden State Warriors in a rematch of the NBA Finals.