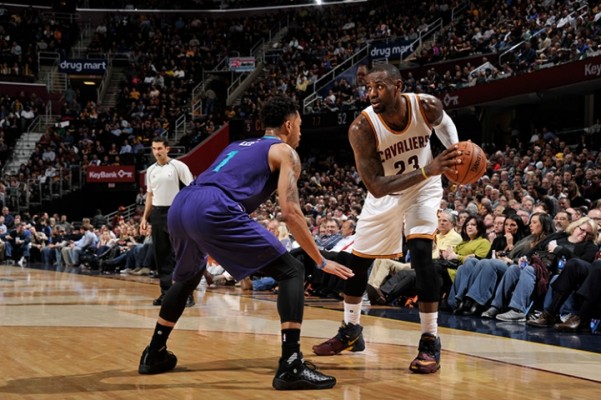 (Cleveland, OH) – Taking advantage of a pair of first-half runs, the Cleveland Cavaliers bounced back from a loss on Monday night to knock off the Charlotte Hornets, 114-103, at Quicken Loans Arena on Wednesday night.

LeBron James and Kyrie Irving each scored 23 for the Cavaliers, with James grabbing seven rebounds and handing out seven assists, while Irving contributed six rebounds and five assists. J.R. Smith added 16 points and the team’s newest addition, veteran Channing Frye, showed off his long-range prowess with four three-pointers to finish with 15 on the night. Matthew Dellavedova rounded out the double-figure crowd with 10 points and seven assists.

Much of the postgame chatter was about Frye’s performance with James joking about how he’ll work with the veteran:

On the rebounding front, Tristan Thompson led Cleveland with 10 boards and Timofey Mozgov added nine. Collectively, the team’s ball movement was strong, with 26 assists on the night.

Frye, who didn’t play much in his final weeks in Orlando, spoke about how he’s still in a period of adjustment:

“It took me a while to get used to getting open,” Frye said. “When they start yelling at you, ‘Shoot the ball,’ you just have to say, ‘Screw it,’ and start shooting.”

Irving spoke about how he and James offered strategy to Frye:

“We just told him if nobody’s in his jersey, just let it go.” Irving said. “He knows how to play the game.”

The two teams actually traded runs during the first half, though the Cavs were able to put a pair of them together to take control of the game. The Hornets started things in the first quarter when they went on a 13-2 run over a span of four minutes.

However, that surge was immediately matched by a 14-3 push from the Cavs to make it 33-27 with 9:20 left in the second quarter. After Charlotte reduced the deficit to three at 37-34, a 21-10 Cleveland run gave the Cavaliers their biggest lead of the half at 58-44 with 2:54 to go before intermission. They would leave the court holding a 63-52 lead.

A key reason for Cleveland’s 40 points during the second quarter was connected to hitting a sizzling 70 percent of their shot attempts during the period.

Cavs head coach Tyronn Lue offered a simple explanation about the team’s strategy during the game:

“Just push the pace to try and get an easy basket first.”

In the third, the Cavaliers managed to maintain a lead of at least seven points, boosting it to 14 on two occasions before taking an 88-76 lead into the final quarter. There, a 13-5 Cavs run in just over three minutes made it 101-81 and ended any comeback hopes for the Hornets.

The margin would reach as high as 24, but the suddenness of the burst up to 20 points and who was behind it made it noteworthy. In a span of just 92 seconds, Frye nailed a trio of three-pointers, an indication of the offensive explosiveness that made him so attractive to the Cleveland front office.

Lue spoke about what to expect from Frye going forward:

The Cavaliers are back in action on Friday for the first of two consecutive road tests when they travel to face the Toronto Raptors in a game set to tip off just after 7:30 p.m. ET. The Cavs currently hold a three-game advantage over the Raptors for the best record in the Eastern Conference.