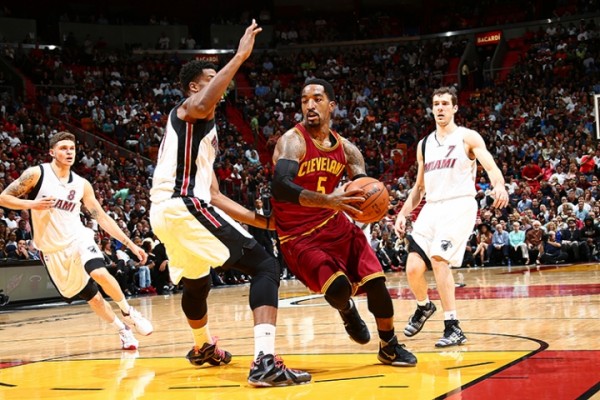 (Miami, FL) – With their superstar forward and leader LeBron James inactive for the first time all season due to rest, the Cleveland Cavaliers (13-7) dropped their third game in a row with a 99-84 loss to the Miami Heat (12-6) at American Airlines Arena on Saturday night.

“I kind of had to force the issue,” said Cavs head coach David Blatt on his decision to sit James against his former team. “Believe me, it’s tough to sit him out. He’s not only our best player, but he’s the best player in the game.”

It was simply a rough night for the Cavs, who continue to be without the services of All-Star point guard Kyrie Irving and shooting guard Iman Shumpert. Cleveland as a team shot only 36.5% from the field on the night, including a dismal 6-of-28 from behind the arc.

“I didn’t think our first unit did a good job tonight, for the most part,” said Blatt. “It wasn’t until we got later into the rotation that we played as well as we should have.”

Small forward Richard Jefferson, who filled in for James in the starting lineup, led the Cavs in scoring with 16 points (6-of-18 from the field, including 0-of-7 from three-point range), three rebounds and two assists. Shooting guard J.R. Smith had 12 points and two assists, while point guard Matthew Dellavedova added 11 points and five assists.

“It’s totally different,” said Smith on playing short-handed without the services of James. “He’s like a coach on the floor on top of being the best player.”

The Cavs will head home in hopes of snapping their losing streak when they take on the Portland Trail Blazers (9-12) at Quicken Loans Arena on Tuesday night. The contest, which is scheduled to tip off shortly after 6:00 pm CT, will be broadcast nationally on NBATV.