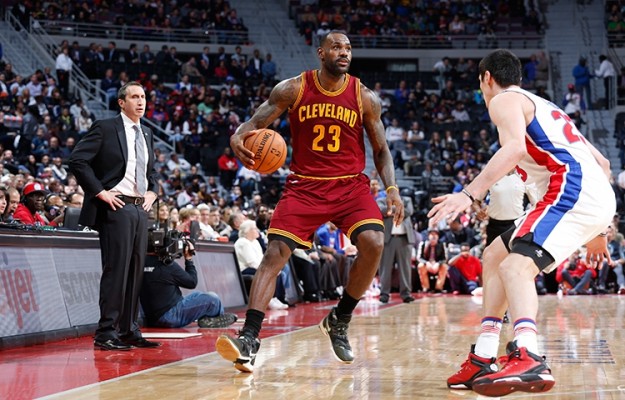 (Detroit, MI) – Going cold at the wrong time was costly for the Cleveland Cavaliers as they were outscored 14-4 down the stretch by the Detroit Pistons to drop their second game in a row, losing 104-99 at the Palace of Auburn Hills on Tuesday night.

After Kevin Love connected on a jumper to make it 95-90 with 3:49 left, the Cavaliers then missed their next four shots and watched Detroit move past them to take a 102-99 advantage. J.R. Smith then rushed a three-point attempt with 9.9 seconds left that missed and the Pistons then converted both free throws to clinch the game.

After the game, Cavaliers head coach David Blatt said that had no problem with Smith’s quick attempt:

The loss, in the team’s third straight road game, drops the Cavs to 8-3 on the year, while Detroit moves above .500 at 6-5, playing in their first home game after a six-game road trip.

One bit of fourth quarter strategy that backfired for the Cavaliers was the deliberate fouling of Pistons center Andre Drummond on two occasions. Entering the game, Drummond was hitting just 40 percent of his free throws, but he managed to make three of his final four attempts.

Some other negatives on the night for Cleveland was that Detroit dominated the offensive side of the boards with an 11-3 edge and the Cavs again struggled for most of the game at the foul line, hitting just 12-of-20 free throw attempts. In addition, the last three quarters saw virtually no offense by Cleveland in the final stages of each quarter.

LeBron James spoke about the team’s continuing issues at the charity stripe:

“We’ve got to shoot better, practice more,” James said. “We can’t put ourselves in that position.”

Blatt blamed defensive lapses as one of the key reasons for the defeat:

“I thought we had a stretch where we had a chance to put the game away,” said Blatt. “But we let down defensively, and there’s no excuse for that.”

On pace for another huge scoring night with 23 points in the first half and hitting eight of his first 10 outside shots, James went cold, managing to make just three of his last 11 attempts, the final one coming on an easy layup with the Pistons protecting against a tying three-pointer in the final minute. He finished with 30 points, six rebounds and three assists. However, he did pass Jerry West on the all-time NBA scoring list to move into 19th place on that prestigious list.

James expressed his displeasure with how the game unfolded:

“Just as well as we played in the third quarter, we played badly in the fourth,” James said. “We were too relaxed, too nice. We have the ability to be a great team, but right now, we’re not a good team.”

Love narrowly missed a double-double with 19 points and nine assists. The backcourt of Smith and Mo Williams finished with 15 apiece, while Timofey Mozgov added 10 on the evening.

Love spoke about what was needed for the Cavaliers to get back on the winning track:

Both teams relied heavily on their starters, with the Cavalier reserves managing just 10 points, while Detroit’s backups contributed just nine points in the winning effort.

Love also gave the Cavs their biggest scare of the night with 2:17 left in the second period, when his knee hit the knee of the Pistons’ Ersan Ilyasova. Love went down in pain, holding his knee, but no further issues developed.

Blatt noted what aspects were disturbing to him over the past two games:

“We need to toughen up,” said Blatt. “I didn’t think we displayed the toughness we showed last year in these last two games.”

James spoke about the need to get back on track:

“We’ve got so much to do,” James said. “We’re not good enough right now to take things for granted.”

Tristan Thompson also mentioned how imperative it was to come out focused in the team’s next game:

“We better come out with some fight,” Thompson said. “Otherwise, we’re just wasting our time.”

Next up for the Cavaliers is a rematch on Thursday night at Quicken Loans Arena against the Milwaukee Bucks. Just this past Saturday, the two teams hooked up for a double overtime thriller that ended with the Bucks victorious. Tipoff will be set for just after 8 p.m., with the game nationally broadcast on TNT.