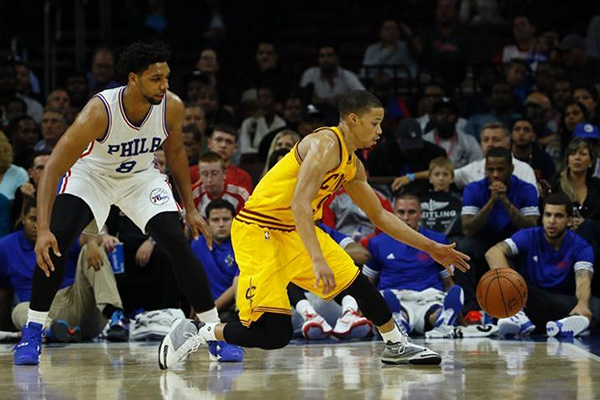 (Philadelphia, PA) – Holding the lead for all but two seconds wasn’t good enough for the Cleveland Cavaliers as they fell in a 115-114 preseason heartbreaker to the Philadelphia 76ers at the Wells Fargo Center on Thursday night.

Against a fourth quarter lineup of primarily Cavalier free agents, the 76ers, who had trailed by as many as 19 during the game, scored eight points in the final 1:07 to send Cleveland to their second straight preseason defeat. The key factor was two turnovers in the final 11.4 seconds to give Philly their chance. The winning three-pointer was then struck by Scott Wilbekin with 1.9 seconds remaining

The loss spoiled an outstanding individual performance by free agent guard Jared Cunningham, who finished the night with 31 points. He connected on eight of his ten outside shots and notched 13 points from the free throw line. Meanwhile, the trio of Matthew Dellavedova (13), D.J. Stephens (11) and Anderson Varejao (10) combined for 34 points on the night.

On the rebounding front, Sasha Kaun paced Cleveland with seven, while free agent Austin Daye hauled down six. The Cavs chose to sit the trio of LeBron James, Timofey Mozgov and J.R. Smith to give them some rest. Prior to the game, Cavs head coach David Blatt spoke about his reasoning for the lineup decision:

“In an ideal world, it would be nice to have a game and a practice day or two and maybe a day’s rest,” said Blatt. “Having the back-to-backs, so many of them in a short period of time in the preparation period; it’s not the optimal training procedure for us.”

The Cavaliers scored the first five points of the game, and seemed on the verge of blowing the game open. However, each time, the 76ers battled back, but Cleveland went on a 9-2 run during the final 95 seconds of that opening stanza to take a 31-24 lead after one quarter.

Varejao and Cunningham handled all of the Cavaliers’ scoring in the last half of that quarter. Varejao, who only played six minutes on the night, notched all 10 of his points during that span, while Cunningham contributed six, including a flashy layup with 1:35 to go in the quarter that was part of a three-point play.

At halftime, Varejao spoke about how he felt after his brief stint:

“I’m feeling great. It’s good to be back,” said Varejao. “I just want to take big steps and stay healthy.”

With the Cavs holding a 37-31 advantage early in the second quarter, 13 unanswered points help put Cleveland in the driver’s seat with a 19-point lead. They were able to maintain a double-digit lead until heading to the locker room with a 65-54 advantage.

The 76ers charged back to get within four in the third quarter at 75-71, but that would be as close as they got until the late dramatics. The Cavaliers went on a 14-3 run over the final four minutes to take an 89-75 lead into the final quarter.

Cleveland returns to the court on Monday night when they face the Memphis Grizzlies in Columbus in a game that will tip off just after 7 p.m.