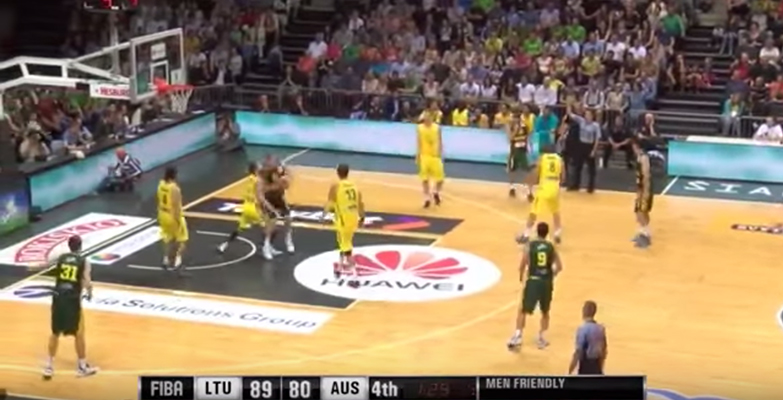 It would seem Matthew Dellavedova’s on-ourt antics have gone international.

The undersized Cleveland Cavaliers guard was involved in a skirmish during a friendly in preparation for the 2015 FIBA Oceania Championship.

During the fourth quarter of Australia and Lithuania’s friendly, the Aussie once again picked on someone a lot bigger than his own size. Chris Fedor of the Northeast Ohio Media Group detailed the “fight” as follows:

“As the undersized Dellavedova was trying to stand his ground in the post, he pushed the bigger Sabonis in the back, leading the referees to blow the whistle and intervene.

“But that didn’t stop the feisty Australian. He took an unnecessary swipe at the ball, angering Sabonis and causing a few of his teammates to get involved before it was broken up.”

This is not uncommon for Dellavedova—he became known for his toughness and hustle during this past year’s postseason. Despite averaging just 7.2 points per game on 34.6 percent shooting from the field, the gritty Australian became an irritant for opposing players due to several high-profile skirmishes involving the Chicago Bulls’ Taj Gibson and the Atlanta Hawks’ Al Horford and Kyle Korver.

In the case of Korver, Dellavedova fell on the forward’s leg while scrapping for a loose ball during the Eastern Conference Finals. The incident would end up finishing Korver’s season due to a severe high ankle sprain. The Cavaliers would make short work of the Atlanta Hawks in 4-0 sweep.

Dellavedova’s Australian national team is looking to qualify for the 2016 Olympics. They will have the opportunity to do so if they defeat New Zealand in less than two weeks.