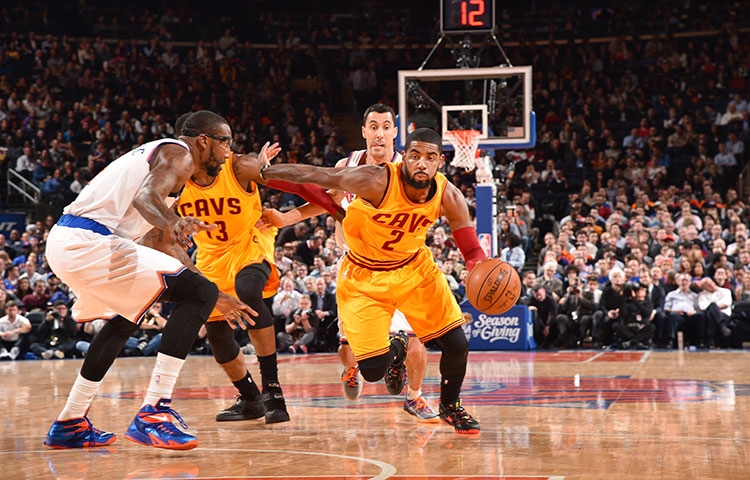 (New York, NY) — Kyrie Irving scored 37 points, the last two coming on a layup with 10 seconds left, as the Cleveland Cavaliers avenged their opening night loss to the New York Knicks by winning a thrilling 90-87 contest at Madison Square Garden on Thursday night.

Carmelo Anthony’s three-point attempt in the closing seconds bounced off the rim due to pressure from LeBron James. Afterwards, James said about the play, “I just tried to put as much pressure on him as possible.”

Cleveland Head Coach David Blatt was obviously happy about the win and commented about the last 10 seconds by saying, “We were willing to give up a two. We forced them to dribble the ball and put it up in duress.”

The dramatic win was the team’s fifth straight victory and improved their season mark to 10-7. The Cavaliers held the Knicks scoreless over the final 3:16 of the game, with Irving’s layup serving as the only points scored down the stretch.

Leading up to the late-game drama, New York had cut the deficit to one at 88-87 on an Amar’e Stoudemire layup with 3:06 left. After a Kevin Love three-point attempt was off, the Knicks missed three shots in an attempt to take the lead before Anthony then turned the ball over. After a miss from James, a Stoudemire hook shot missed with Love then getting the rebound. Two missed shots by the Cavs gave the Knicks the ball back once again.

With 33 seconds to go, Shane Larkin’s floating jumper missed and Carmelo Anthony’s tip attempt came up short, with Shawn Marion getting the rebound to set up Irving’s layup.

Irving’s scoring output came close to his best-ever performance at the Garden, which came on December 15, 2012. In that clash, Irving scored 41 against the Knicks in a 103-102 loss.

After the game, Irving was satisfied with the victory despite the team struggling against a team that dropped to 4-16 on the year. “I felt like I was in a good rhythm. We got down, but we didn’t get down on ourselves.” said Irving.

While the fourth-year point guard did say, “There’s a lot of things we need to work on,” he noted the bottom line by adding, “We won ugly and the only thing that we we’re going to remember is the W.”

Blatt praised Irving’s performance after the game, noting the 37 points, but saying, “I think that Kyrie is making good decisions with the ball. What I really like is that he’s playing both ends of the court.”

With Irving on a scoring tear, James effectively became the team’s point guard, finishing with a double-double of 19 points and 11 assists.

When the second half began, the Cavaliers were trailing 53-50. A slow start saw Cleveland pick up only a single field goal (another Irving three-pointer) in the first five minutes plus. However, a Marion three with 6:25 remaining kept them close at 61-58.

After Anthony’s jumper made it 64-60, a LeBron James layup was sandwiched by two more baskets from Irving to give Cleveland its first lead since the first quarter with 2:26 left in the quarter.

New York answered with a 9-2 run to close out the stanza, capped by a Hardaway layup with 9.2 seconds left for a 73-68 Knicks lead.

With just under nine minutes left, New York held a seven-point advantage at 79-72 after a Stoudemire layup, but from that point on, the Cavs outscored them 18-8.

Blatt said about the second half defense, “What I really liked was that we held them to 34 second half points. That’s what won us the game.”

At the start, the two teams took turns with early leads, with the Knicks holding a 7-4 advantage before the Cavaliers ran off six straight points. New York answered with five unanswered points of its own to make it 12-10.

Cleveland held the advantage for most of the remaining seven minutes, with Dion Waiters closing out the scoring on a finger roll layup with 29.5 seconds to go in the opening quarter to give the Cavs a slim 25-24 lead.

Tim Hardaway, Jr. had notched the final Knick points of quarter number one on a three, then added two more in the opening minutes of the second period to give New York a 32-27 lead. The Knicks would bump the advantage up to seven on J.R. Smith’s jumper with 9:25 to go before the break, then move it to 10 on another Hardaway three.

The New York margin would go as high as 11 at 46-35 after Quincy Acy connected on a pair of free throws with 4:50 left before intermission. The Cavaliers ran off six unanswered points, only to see the Knicks move the lead back to 10 on an Anthony dunk with 1:51 remaining.

From that point, Irving got Cleveland back in the game, beginning with a stylish running bank shot that turned into a three-point play. After nailing two more free throws, he tallied the final points before halftime with a three-pointer with 14.1 seconds to go, giving him 17 for the quarter and 23 for the half to make it 53-50.

Love had a quiet double-double with 11 points and 10 rebounds, but commented about the team’s fourth quarter defense. “The last six minutes were great for us. We got the stops we needed.”

The Cavaliers will once again look for revenge on Friday night when they head north of the border. There, they’ll take on the Toronto Raptors, the last team to defeat them, and currently holders of the best record in the Eastern Conference with a 15-4 mark. Back on November 22, Cleveland took an early 24-6 lead against Toronto, only to see the Raptors roar back for a 110-93 win.