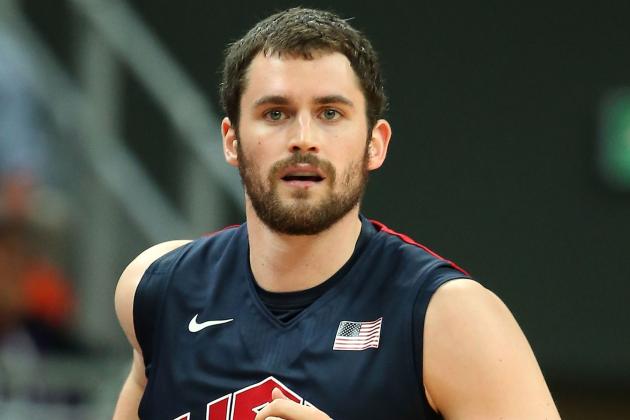 Despite the season-ending shoulder injury that he suffered on April 26, Cleveland Cavaliers’ forward Kevin Love, will attend the 2015 USA Basketball minicamp next month in Las Vegas, according to a report on Bleacher Report and a tweet from ESPN’s Marc Stein.

Some more Team USA news: ESPN sources say Kevin Love (though still rehabbing) and Andre Drummond will both be in attendance for Vegas camp

That get-together will lay the groundwork for selecting the 2016 United States Olympic team for the Summer Games to be held in Rio De Janeiro, Brazil.

The injury will obviously keep him from competing in two days of non-contact workouts, followed by an intrasquad scrimmage on August 13. However, there’s an important reason why Love and other injured players are expected to be there. That reason stems from the simple fact that attendance is mandatory for anyone seeking to be considered for the team, with 34 players vying for a spot on the squad.

Love has won gold medals at both the 2010 FIBA World Cup and the 2012 Summer Olympics that were held in London. He was named a member of the USA team in January 2014, but chose not to compete last summer in the FIBA World Cup due to his then-uncertain status, which eventually resulted in a deal to send him to play for the Cavaliers.