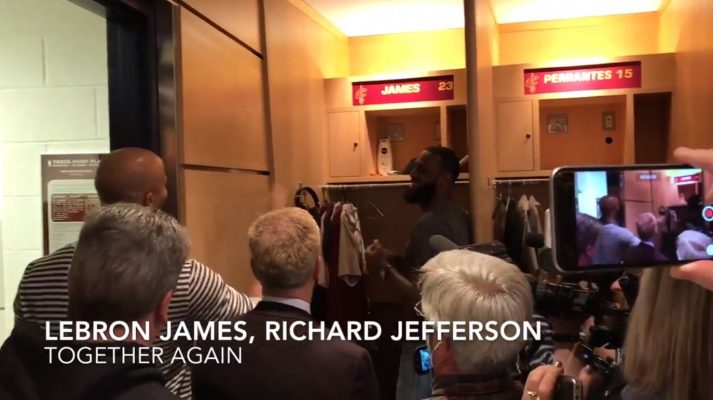 In his two seasons as a member of the Cleveland Cavaliers, veteran forward Richard Jefferson was one of the more popular players among his former teammates and was a member of the iconic 2016 NBA title team. Now playing for the Denver Nuggets, Jefferson offered an example of that continuing bond by taking time after Saturday night’s win by the Nuggets over the Cavaliers to renew acquaintances with LeBron James.

Among the topics in that brief discussion were remarks about the game, coupled with the making of dinner plans around the Cavaliers-Nuggets rematch in Denver on Wednesday night. Jefferson also mentioned chatting with another former teammate, J.R. Smith, before ending the conversation to catch the team bus. Just prior to leaving, he also playfully acknowledged the assembled media.

During his two seasons in Cleveland, Jefferson’s off-the-court presence made him a regular part of a postgame feature, “Is It Something I Said?” on Fox Sports Ohio’s broadcast of team games. In addition, he co-hosted the popular “Road Trippin'” podcast with another former Cavalier, Channing Frye.

The 37-year-old Jefferson was traded on Oct. 14 to the Atlanta Hawks, who subsequently waived him before then signing a one-year contract with the Nuggets five days after the trade. In 17 games this season with Denver, Jefferson is only averaging 9.1 minutes per game, scoring an average of 1.8 points and grabbing 0.9 rebounds. However, as seen in the video, his ability to connect with teammates and his veteran leadership remain subtle assets that can’t be measured on the stat sheet.