Has J.R. Smith Played His Last Game for the Cleveland Cavaliers? 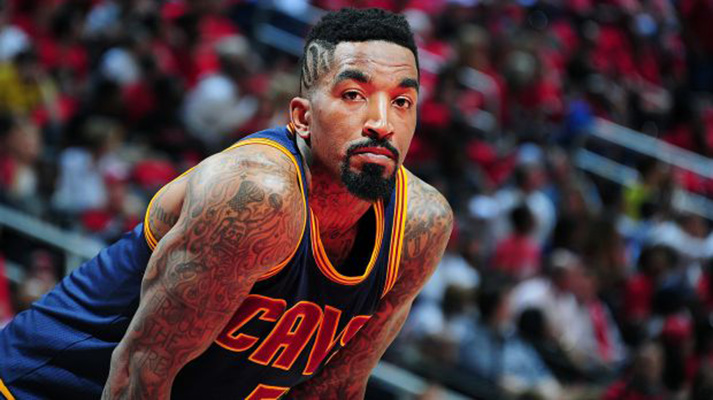 With the onslaught of free agent negotiations the Cleveland Cavaliers have to deal with beginning on Wednesday, the most intriguing decision the team needs to make will be regarding the status of shooting guard J.R. Smith.

Smith, who had the opportunity to opt out of his deal with the Cavaliers that would have paid him $6.4 million next season, has just done that and is reportedly seeking a multi-year that would pay him at least $8 million a year.

Related: Which Players Are Staying and Which Are Leaving?

That price seems a bit steep for a streaky player who endured a brutal stretch during the NBA Finals. Smith himself was blunt in his appraisal of that effort, saying at one point that he was playing like “horse sh*t.”

The numbers reinforce that analysis, as Smith connected on just 24-of-77 shots from the field in the six-game series, including 15-of-51 from beyond the three-point line. That inability to find his stroke proved to be deadly to the Cavs, who became a virtual one-man team that couldn’t keep up with the depth of the Golden State Warriors.

After the Finals, it was reported that Smith had indicated that he would be opting out, but that he expected to return to Cleveland next season. That looks to have become less likely if his reported contract demands are true.

Cleveland general manager David Griffin gave a lukewarm and non-committal response when asked about re-signing Smith, saying, “If it’s the right situation for us, yeah. We certainly intend to pursue those conversations.”

Given the fact that re-signing the trio of LeBron James, Kevin Love and Tristan Thompson will mean adding at least $15 million to the team’s payroll next season, giving Smith a 25 percent raise doesn’t seem to a practical thing for Griffin to do. That’s because Smith’s streakiness is coupled with the fact that he’ll be 30 years old when next season tips off.

So it’s very possible that either Smith realizes that the market for his services at that price just isn’t there, or the Cavaliers simply choose to look elsewhere — should he refuse to budge from not only the bump in salary, but the multi-year aspect as well.

Another factor going against Smith is the fact that there will be plenty of other shooting guards in the free agent market, which likely dilutes his impact. Some may actually end up costing more per year than Smith, but the consistency in their overall games, as opposed to Smith’s, likely warrants such an investment.

Related: 10 Free Agents the Cleveland Cavaliers Could Sign This Offseason

One subtle bargaining chip that might make it easier for other shooting guards to consider signing with the Cavs is the simple fact that they’ll be entering the 2015-16 as the favorite to win the NBA title.

Of course, the most intriguing free agent in that category is Dwyane Wade, who established an even deeper bond with James during their four years together in Miami.

The only problem with signing Wade would likely mean paying double what Smith was making. That’s because the veteran made $10 million this past year, and reportedly wants double that and a multi-year deal from the Miami Heat.

Wade won’t get $20 million a year from any team, but he won’t come cheap either. That’s because he has the championship pedigree (three titles) and averaged over 21 points per contest last season.

The key issue with Wade is his shaky health, which has seen him sidelined for an average of 20 games in each of the last four years. Given the fragility of Kyrie Irving (broken kneecap), Wade’s salary demands might dictate whether the Cavaliers pursue him.

Of course, all James really has to say during his frequent conversations with the Cavs front office is that he wants Wade. That will put the onus on Griffin & Co. to get something done, something that might be easier if the team is able to trade Brendan Haywood and his unique contract.

That’s because while James and Smith are supposedly close, their friendship pales in comparison to the tight connection James has with Wade. When the Cavaliers and Heat met on Christmas Day, James was heard saying, “We’re gonna reunite again and do some bigger and better things.”

It’s a given that the Cavs will be in salary cap hell for next season, but since they finished just two games away from a title, there’s no way they can consider worrying about the bottom line. In part, that’s because James is watching closely, and since he’s the linchpin of any success the team might have, alienating him in that fashion is simply a bad business strategy.

However, it doesn’t mean that they need to invest more money in someone who hasn’t proven himself in the clutch. That means that unless Smith takes a different tact, he’s likely donned a Cleveland uniform for the last time.