Don't Miss
Home / Videos / Video: LeBron James on What Advice He Would Give to Jae Crowder to Help Improve His Game

Video: LeBron James on What Advice He Would Give to Jae Crowder to Help Improve His Game 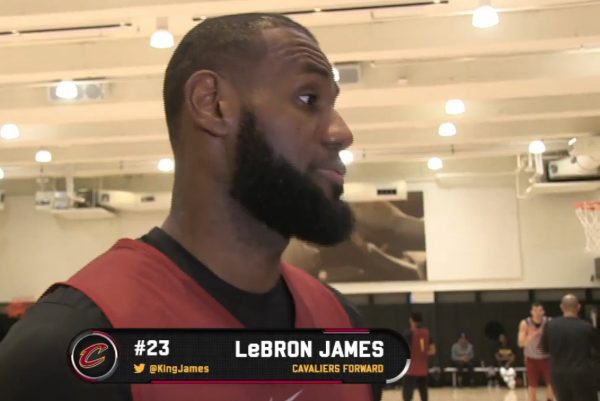 LeBron James made the seamless transition from forward to point guard last week as the Cleveland Cavaliers are still waiting for Derrick Rose to return from an ankle injury. Now that Rose is almost ready to return to the court, James will be moving to the small forward position and teammate Jae Crowder will be coming off the bench as his backup.

While Crowder started the season as the Cavs’ starting power forward, he has taken the change in stride. Following the Cavs’ practice on Friday, James spoke with members of the media about the challenges Crowder has faced as a result of the early-season changes to the lineup.

“Jae has played the power forward position all training camp,” James said. “Learning the 4, learning the 4, and then we make the switch. We have an injury, I go to the 1, he slides to the 3. It’s a different position for him that he hasn’t had many repetitions at.”

James continued by offering Crowder, who is averaging 8.2 points, 2.8 rebounds, and 0.8 assists per game this season, advice on how to best fit in with the team.

“Well, he’s already fitting in,” James said. “Now on the court, just play. Don’t think. If you got an open shot take it, be aggressive, and do what we brought you here to do. We want you to defend, which we all do, and we want you to just be aggressive offensively, and I think he’s going to do that.”

Crowder also spoke to members of the press regarding the move and clarified that the most important thing is winning.

“I’ve been open to change because we haven’t found our groove yet,” Crowder said. “We’re still searching for answers to see how we can get games rolling in our favor. So I’m open to whatever the team wants me to do, because at the end of the day we’re trying to reach a goal.”

The Cavaliers currently sit at 3-2 on the season as they prepare for their Saturday night matchup against the New Orleans Pelicans. If one thing is clear early in the season, it’s that James, Crowder, and the rest of the Cavs’ roster can expect a multitude of depth chart shakeups all season long.

While Crowder is out of the starting lineup for now, his ability to offer valuable minutes off the bench in James’ relief could make the Cavs an even more complete and dangerous team going forward.