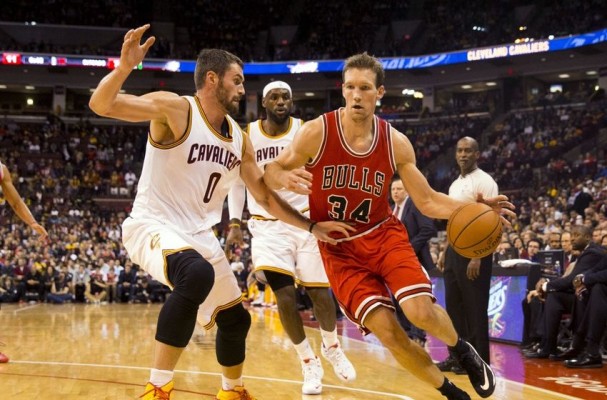 One of the pending free agents the Cleveland Cavaliers could be pursuing once free agency officially gets underway on Wednesday is veteran Mike Dunleavy from the Chicago Bulls.

That information comes from a tweet by ESPN’s Marc Stein, who noted that LeBron James has apparently made that suggestion during his reported daily conversations with Cavaliers general manager David Griffin and his staff. The Cavs’ strained budget should allow them to offer a mini midlevel exception, which would come to slightly over $3 million.

However, almost immediately after noting that information, Stein tweeted that the Bulls have every intention of signing both Dunleavy and fellow free agent Jimmy Butler.

The 6’9″ Dunleavy, who can play both forward roles as well as shooting guard, will be 35 years old at the start of next season. He’s played the last two of his 13 NBA seasons with the Bulls. Last year, he averaged 9.4 points, 3.9 rebounds and 1.8 assists per game, missing five weeks due to an ankle injury.

During the 2014-15 regular season, Dunleavy’s averages against the Cavaliers were much higher, scoring 14.3 per game, while grabbing 5.7 boards and dishing out 4.3 assists. In the six-game playoff series between Cleveland and Chicago, Dunleavy averaged 11.3 points, 4.0 rebounds and 2.2 assists.