Cleveland Cavaliers vs. Golden State Warriors Game 6 Recap: All Good Things Must Come to an End 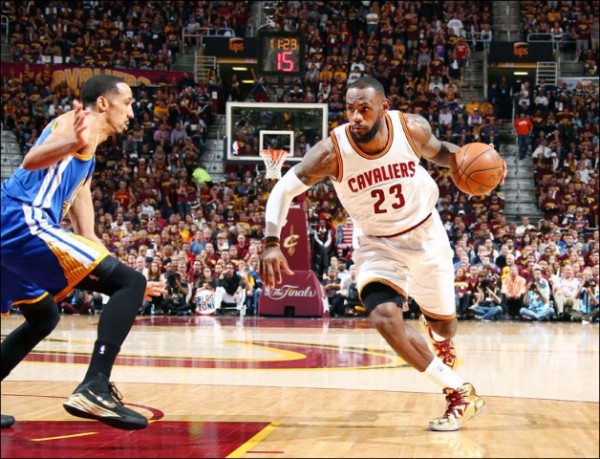 (Cleveland, OH) — Despite a hard fought series in which they were quite undermanned, the Cleveland Cavaliers (2-4) fell 105-97 to the Golden State Warriors (4-2) in Game 6 of the 2015 NBA Finals at Quicken Loans Arena on Tuesday night, which snapped a 40-year championship title drought for the Warriors.

“I’m proud of everybody in our organization,” said Cavs head coach David Blatt after his team’s loss. “Not every story has a happy ending. Doesn’t mean it’s a bad story.”

The Warriors were simply too much of a sharp-shooting, tenacious team for the Cavs to keep up with. Minus the services of three-time NBA All-Star point guard Kyrie Irving, three-time All-Star power forward Kevin Love and center Anderson Varejao, the Cavs were down to a seven-man rotation under coach Blatt’s system.

“I don’t know any other team that made the Finals without two All-Stars,” said LeBron James after the game. “We had three playmakers in suits.”

Golden State shooting guard Andre Iguodala, who was selected as the 2015 NBA Finals MVP, propelled his team to a championship-clinching win in Game 6, as the 10-year NBA veteran scored 25 points (nine of 20 shots made from the field), five rebounds, five assists and two steals. 2014-15 NBA regular season MVP point guard Stephen Curry also added 25 points (eight of 19 shooting from the floor) to go along with eight assists, six rebounds and three steals.

“The sacrifice every guy made from Andre (Iguodala) and David (Lee) stepping away from the starting lineup, we just played,” Warriors head coach Steve Kerr said. “And they were all in it just to win. That’s all that mattered. This is an amazing group of guys.”

Warriors forward Draymond Green quietly paced his way to a triple-double on the night, as the NBA All-Defensive First-Team player contributed 16 points, 11 boards, 10 assists and three steals. Center Festus Ezeli and point guard Shaun Livingston both came off the bench to each score 10 points in the win.

On the losing end, as he falls to 2-4 in his career in the NBA Finals, LeBron James put forth yet another amazing performance. The 11-time All-Star was outstanding, as he exploded for 32 points (13 of 33 from the field), 18 rebounds, nine assists and two steals. Despite not being able to get enough support from his teammates consistently on the offensive end, James had an NBA Finals for the ages as he averaged a whopping 35.8 points, 13.3 rebounds, 8.3 assists and 1.3 steals in 45.8 minutes per game in six contests.

“LeBron doesn’t have a glaring weakness,” said Iguodala after his team’s victory. “So you got to pick up on smaller things to make him uncomfortable.”

In the end, bad free-throw shooting (27 of 39 from the line), 19 team turnovers on the night, wildly inconsistent defense and spotty three-point shooting for most of the game (6 of 26 from behind the arc) was what contributed heavily to the Cavs’ season-ending loss.

“I’ve been on the short end of this four times,” said James in his post-game press conference. “It’s not a great feeling when you lose. I haven’t thought about next season at all.”

J.R. Smith, who had 19 points on the night to go along with five boards, did not find his shooting rhythm until it was too late in the game. Timofey Mozgov and Tristan Thompson were the only other Cavs to score in double figures, as the two big men recorded double-doubles with Mozgov’s 17 points, 12 rebounds and 4 blocks as well as Thompson’s 15 points and 13 rebounds.

Up next, the Cavs are in for a very important offseason in terms of player contracts and how they handle NBA free agency. It was a heartbreaking end to the season for Cleveland, but better days are ahead and the future looks very bright.