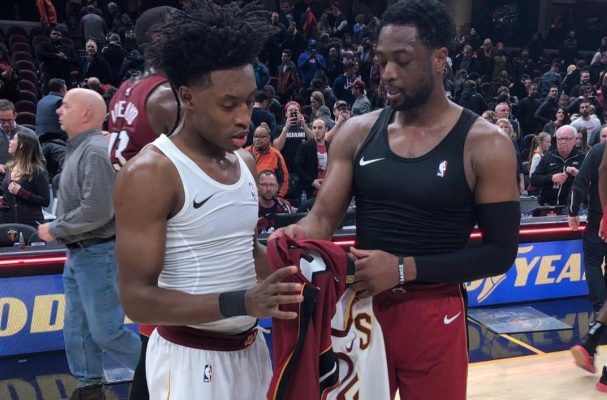 The Cleveland Cavaliers are facing off against Dwyane Wade and the Miami Heat tonight, and Cavs players are already predicting who Wade will give his jersey to after the game.

Wade has made news all season by swapping jerseys with established stars and talented youngsters as part of his farewell tour from the NBA.

Rookie point guard Collin Sexton was the Cavs player who got his hands on Wade’s jersey following their Jan. 25 matchup. It seems Cedi Osman and Channing Frye have already been pegged as the favorites for tonight’s swap.

Who's getting @DwyaneWade's jersey tonight ?

“I think Channing might get it,” Sexton said. “Since it’s his last go around, last time playing against D. Wade.”

Frye then offered his own take.

“Could be Cedi,” Frye said while sitting right next to Osman. “I’d say it’s Cedi. I think Cedi is the future of this team. He gave it to Collin, so he’s going to give it to Cedi.”

Tristan Thompson then offered a very compelling case for Frye.

“Probably Channing might get the jersey,” he said. “They’re both retiring. From one old geezer to another.”

Finally, Larry Nance Jr. clarified it all, predicting not only who will get the jersey, but why as well.

“I’m saying team Channing,” he said. “Cedi’s going to get nervous and miss his chance and Channing is going to dive right in there, I’m positive. But team Larry Nance Jr. is not going to miss out either.”

While tonight’s game will certainly be fun to watch, as the Cavs continue to improve as the season progresses and the Heat battle for a playoff spot, the real action might take place right after the final whistle blows.