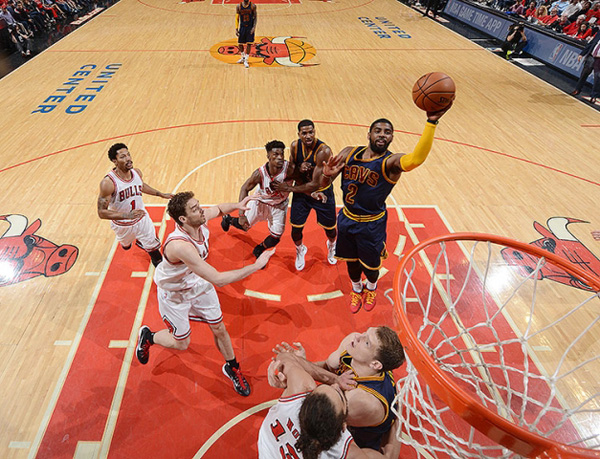 (Chicago, IL) — After the first two games of the series combined for zero lead changes, Game 3 turned into an adrenaline-filled affair from start to finish. Unfortunately, things did not go the Cleveland Cavaliers‘ (1-2) way as the Chicago Bulls (2-1) squeaked out a 99-96 victory as point guard Derrick Rose banked home a three-pointer at the buzzer.

“You tip your hat to him,” said LeBron James after his team’s loss. “The guy made a tough shot.”

Rose, the 2011 NBA regular season MVP, was the undisputed star on the night with his stellar performance in the second half. After his consistent injury woes over the last few seasons, his performance tonight was just too much for the Cavs to overcome, as he tallied 30 points (10 of 26 shots made from the floor), seven assists and seven rebounds on Friday night at the United Center.

“I’m happy I have the teammates I have and the coaching staff I have,” said Rose in his postgame interview. “And like I said, I really believe that’s I’m built for this sh*t.”

After the Cavs led by as many as eight points in the first half, they entered halftime with a 49-47 advantage over the Bulls heading into the third quarter. The game continued to be back-and-forth deep into the final frame.

J.R. Smith, who returned from a two-game suspension, drilled a deep three pointer with 10 seconds remaining in the fourth quarter. However, Rose struck at the buzzer to give Chicago the 2-1 series lead.

James led the way for the Cavs with a stellar 27-point performance, as the 11-time All-Star also had a playoff career-high 14 assists and eight rebounds. However, James missed an easy layup at the end of the game that would have put the Cavs in even better position to seal a victory.

Four other Cavs besides James managed to score in double figures, as Smith scored 14 points off the bench and Tristan Thompson contributed a spirited effort en route to 10 points and 13 rebounds. Kyrie Irving, playing with a very sore foot, added only 11 points (three of 13 from the floor) and four rebounds, while Matthew Dellavedova had 10 points and four assists.

Up next, the Cavs will stay in Chicago for Game 4 at the United Center on Sunday afternoon. The contest, which is scheduled to tip off shortly after 3:30 pm ET, will be broadcast nationally on ABC.