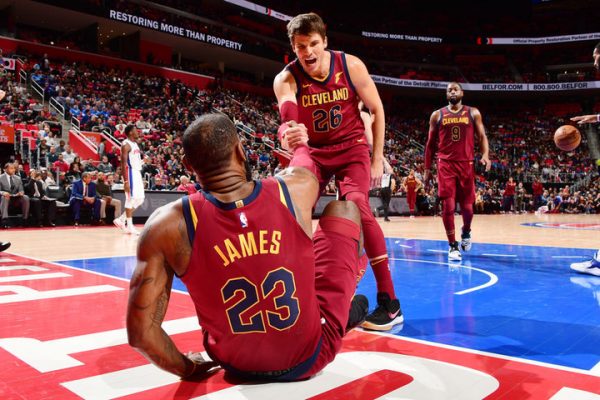 (Detroit, MI) — Putting together their most impressive performance of the season, the Cleveland Cavaliers dominated the Detroit Pistons in a 116-88 victory at Little Caesars Arena on Monday night. The surprisingly easy victory helped snap the Pistons’ six-game home winning streak and increased the Cavaliers’ own winning streak to five games.

Cleveland led by as many as 39, using 16 3-pointers and 28 assists to bludgeon Detroit over the course of the game. With the contest comfortably in hand after three quarters, the Cavs got the opportunity to empty their bench and give plenty of playing time to their reserve unit.

“That was a good win against a good team,” Cavaliers head coach Tyronn Lue said after the game. “Over the last six or seven games, we’ve started to come together as a basketball team.”

Kevin Love led the Cavs with a double-double on 19 points and 11 rebounds, while LeBron James scored 18 and dished out eight assists. All but two of James’ points came during the first quarter.

Other Cleveland players reaching double figures included Jae Crowder with 18, Jose Calderon with 14 in his first Cavs start, Jeff Green with 11 and Channing Frye with 10.

“We had two days off and for an old team, that’s a good thing,” Dwyane Wade, who scored eight points, said. “But we just came out and executed. I liked our communication and attention to the game plan.”

During the first six minutes of action, neither team showed much interest in playing defense, with the squads combining to hit for 65 percent from the field. The Pistons held an 18-17 lead at that point, but for the remainder of the game, it was all Cavaliers.

The Cavs went on a 19-5 run to close the first period, then shifted their play into overdrive during the second quarter to blow the game open. They steadily increased their advantage until taking their largest lead of the half at 27 into the locker room. By that time, they had held a commanding 73-46 advantage.

During the first quarter, James picked up where he left off from Friday night’s 39-point performance by knocking down 16 during the period. As a team, the Cavaliers’ main weapon during the first two quarters was the 3-pointer, with seven different players connecting on 11-of-17 (65 percent) from long-range. From the field as a whole during the first 24 minutes, the Cavs hit on 62 percent of their shots.

“When you’re knocking down 3’s like that, that’s scary,” Wade said.

The second-quarter domination by Cleveland was linked by solid ball movement and effective defense, collecting 10 assists and forcing six turnovers. Detroit did manage to hit on eight 3-pointers during that first half, the only thing that kept them from facing an even larger deficit.

Any thought of a dramatic comeback was squashed by the Cavs’ continued ability during the third quarter to dish the ball with nine assists and shut down the Pistons’ shooting. In the latter category, Detroit managed to hit on just 29 percent from the field, one reason why they trailed 101-62 when the horn sounded to end the period.

The Cavaliers come back home for a pair of home games sandwiched around Thanksgiving. On Wednesday night, they tip off against the Brooklyn Nets at just after 7 p.m. ET, then host the Charlotte Hornets on Friday night, with that tipoff set for just after 8 p.m. ET.