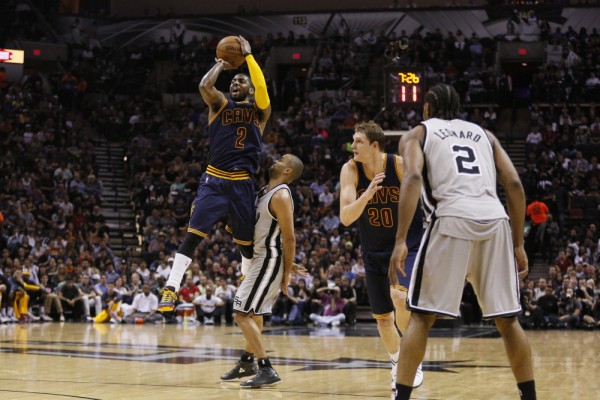 In what was likely the best NBA game so far this season, Kyrie Irving stole the show with a performance of epic proportions. The first overall pick in the 2011 NBA Draft out of Duke University was a man on a mission, scoring a NBA season-high 57 points on the night in the Cleveland Cavaliers‘ thrilling 128-125 overtime victory over the San Antonio Spurs at the AT&T Center.

His eye-popping display in San Antonio had it all: amazingly efficient shooting from the field (a ridiculous 20 of 32 from the floor), masterful three-point shooting (seven of seven from behind the arc), great defense (four steals), perfection from the free throw line (10 of 10 from the charity stripe) and top-tier ball-handling skills. Here’s a countdown of Irving’s top five plays from his legendary night.

5. Irving Shakes Manu out of His Shoes

The average NBA fan would likely think that Spurs shooting guard Manu Ginobili (a future HOF inductee, four-time NBA champion and two-time NBA All-Star) would not receive publicity for something like this. Well, Irving indeed proved us wrong as he made the Argentinean look foolish.

Next: The Disappearing Act