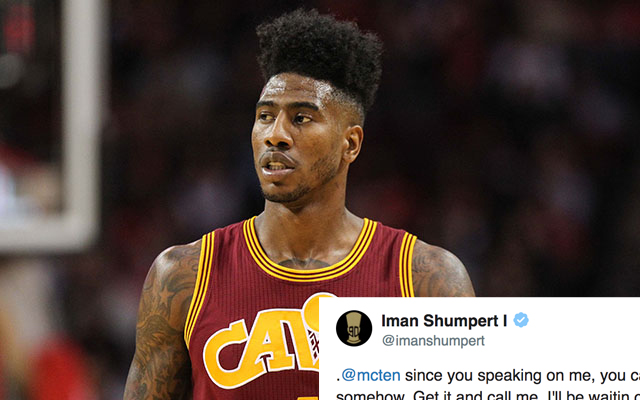 Earlier today, it had been reported by Dave McMenamin of ESPN.com that Cleveland Cavaliers shooting guard Iman Shumpert had requested a trade from the team, as he was supposedly unhappy with his role in Cleveland.

However now, according to Shumpert himself, McMenamin’s report should be taken with a grain of salt, as the guard dropped this tweet directed at the reporter:

.@mcten since you speaking on me, you can find my number somehow. Get it and call me. I'll be waitin on it. I'm done wit social.

NBA writer Alex Kennedy of Hoops Hype also released some information regarding Shumpert, saying that he did not request a trade and plans to be at a player-organized training camp in Santa Barbara on Sept. 18.

I'm told Iman Shumpert didn't request trade. He heard rumors, but he plans to be at player-organized mini-camp in Santa Barbara on Sept. 18.

It’s easy to understand why Shumpert’s frustration has finally reached a tipping point, as his name has been involved in several trade rumors since the start of the offseason.

Shumpert is easily one of the best defenders on a Cavs team lacking in that department, so if he were to indeed be traded, hopefully the Cavs are able to fill that big defensive void.