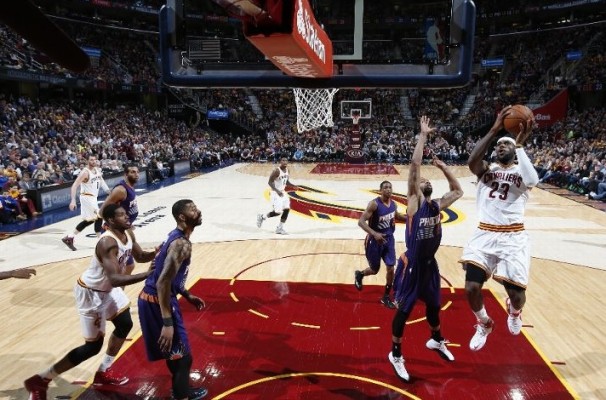 (Cleveland, OH) – Completely shutting down the Phoenix Suns during the first three quarters helped the Cleveland Cavaliers come away with an 89-79 win at Quicken Loans Arena on Saturday night.

The win marked the 13th straight win at home for the Cavs, with Tristan Thompson expressing the mindset of the team with respect to home court advantage.

“We’ve got to protect our court and let teams know when they come into the Q, they’re in for a long night,” said Thompson.

The victory seemed to be headed toward a blowout, but instead caused some uneasy fourth quarter moments. That’s because the Suns, who trailed by as many as 32, were able to cut the Cleveland lead to 10 at 84-74 with just three minutes to go in the contest.

However, five unanswered points by the Cavaliers helped end any visions of an epic collapse.

LeBron James, who had 17 points, eight assists and six rebounds, said simply after the game, “We have to do a better job of closing out games.”

The game had entered blowout territory when Cleveland pieced together a 15-2 run in the first five minutes of the third quarter to make it 68-39, with the Cavaliers then boosting it to 73-41 a few minutes later.

With 1:35 left in the third, a James free throw made it 80-50, before Phoenix added one more basket prior to the end of the quarter. The Suns then added 11 straight points to start the fourth, to make it 80-63, which then began a period of some sweaty palms for Cleveland fans.

That would-be comeback forced Cavs head coach David Blatt to bring the starters back in the game, where they suddenly had struggles as Phoenix kept whittling the margin down.

Afterward, Blatt attributed the fourth quarter issues to fatigue from the four-days-in-five nights and seven-games-in-10-nights schedule the team has had.

Center Timofey Mozgov led all scorers with 19 points, taking advantage of the undersized front line of the Suns.

Blatt said, “I thought we had a decided advantage with Timo around the rim.” He also said, “Timo played an outstanding game for us on both ends of the court. He’s one of the main reasons we’re 21-5 over this stretch.”

James said afterward about Mozgov’s performance, “We knew he was going to be pretty big for us.”

Phoenix began the game with torrid shooting, hitting seven of their first 10 field goals, but connected on just five of 31 attempts for the rest of the first half. That frigid shooting continued after the break for the Suns as they missed eight of their first nine attempts.

The Suns would later go seven minutes without scoring during the second quarter, while Cleveland was only able to manage a single basket from Tristan Thompson over a five minute span. Still, the Cavaliers were able to put together an additional 16-6 run to open up a 46-30 lead with 3:31 left in the half.

By the time both squads headed to the halftime locker room, the Cavs were able to maintain that 16-point lead at 53-37.

Kyrie Irving played only seven-plus minutes during the first half, with Blatt giving him some rest since Matthew Dellavedova was able to help boost the team’s lead.

Afterward, Irving said he wasn’t too bothered by sitting, “That type of rhythm doesn’t come along in the game too much, so you have to take advantage of it.”

The Cavs did thrive while he was out during the second quarter, completely shutting down the Phoenix offense. For those 12 minutes, the Suns managed to hit just four of their 22 shots and finished the first half by shooting just under 30 percent from the field.

One odd fact about the game was that James came back into the contest during the second quarter without his trademark headband, but he dismissed any significance about it afterwards.

The Cavaliers now begin a four-game road trip that will take them to Texas and Florida. The first contest will be a Tuesday night matchup against the Dallas Mavericks that will tip off shortly after 8:30 pm ET.