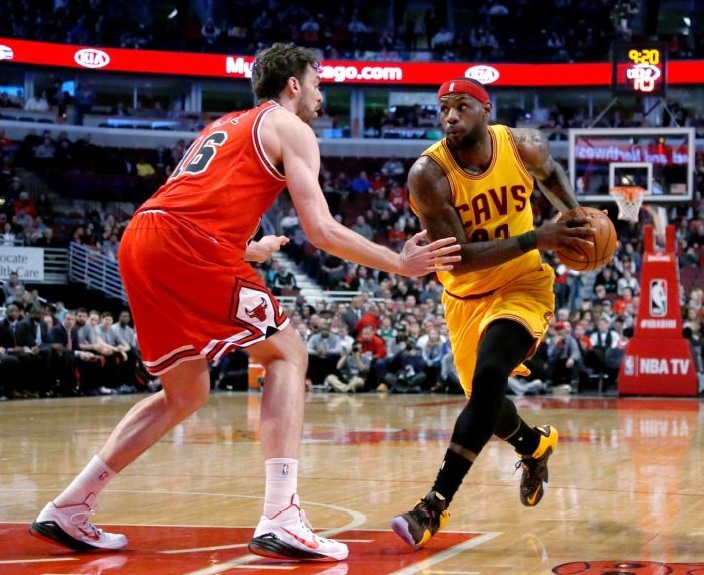 (Chicago, IL) – Playing without the services of power forward Kevin Love, the Cleveland Cavaliers dropped their final game before the All-Star break, losing a 113-98 divisional road clash against the Chicago Bulls on Thursday night.

Love was officially ruled out an hour before the game from an eye injury he sustained in Wednesday night’s victory over the Miami Heat.

The main problem on the night for the Cavs was the Chicago backcourt of Derrick Rose and Tony Snell, who combined for 52 points. LeBron James led all scorers with 31 points.

The foul trouble of center Timofey Mozgov and the eight turnovers by James were detriments as well, but throughout the contest, the Cavaliers appeared listless. They would periodically make runs after falling behind by double digits, only to see the Bulls charge back to again build a comfortable lead.

The last opportunity the Cavaliers came with 8:42 left in the game when James converted a three-point play to make it 91-84 in favor of Chicago. However, seven missed shots in eight attempts and two turnovers by the Cavs over the next four minutes resulted in a 14-2 run that put the game away.

Mozgov collected a double-double with 13 points and 11 rebounds, but his time on the bench, coupled with Love’s absence, carved out a deep hole on the front line that Chicago exploited on numerous occasions.

For the most part, the shooting outside the paint came up short, with the trio of James, Kyrie Irving and J.R. Smith connecting on just 21 of 54 shots.

Despite the loss, Cavaliers’ head coach David Blatt was upbeat about the course of the Cavaliers’ season, saying, “We can go into the break feeling good about our chances going forward, and with the knowledge there are several things we can improve on and do better.”