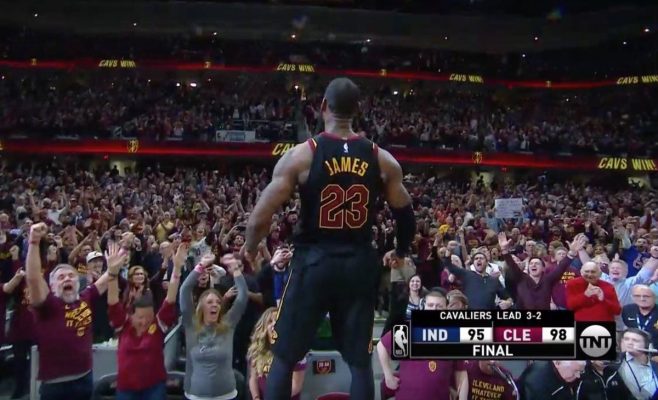 LeBron James has hit countless huge shots in Quicken Loans Area during his career with the Cleveland Cavaliers, but his game-winning 3-pointer in Game 5 against the Indiana Pacers proved once again that it simply never gets old.

With both the game and the series on the line, James rose to the occasion and hit a deep three-point shot to give the Cavs the big win.

Unsurprisingly, the packed arena erupted in cheers, showering James with adoration. After quickly celebrating with his teammates, the three-time NBA champ returned the favor to the crowd by jumping up onto the scorer’s table and basking in the glory.

Even without the last-second heroics, James put in another jaw-dropping performance for the Cavs, finishing the night with 44 points, 10 rebounds, and eight assists.

As for the game overall, the Cavs controlled the contest for much of the night, leading by as much as 11 in the fourth quarter. They could not, however, close the door on a Pacers team that has proven to be a worthy adversary.

While James’ buzzer-beater was undoubtedly fun to watch, it would have also been nice to see the Cavs get a comfortable win before heading back to Indiana in what will now be a must-win game for the Pacers.

The Cavs will have just one day to bask in the glory of James’ shot before taking the court on Friday night to try to close out the series in the six games. After a game like this, momentum is most definitely on their side.