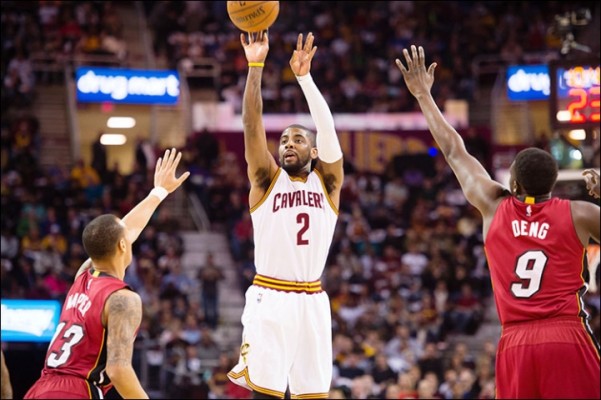 (Cleveland, OH) – After they kept a comfortable double-digit lead for most of the night, the Cleveland Cavaliers (33-21) cruised by the Miami Heat (22-30) in their 113-93 victory on Wednesday night at Quicken Loans Arena.

The Cleveland win snapped an 11-game losing streak to Miami, who were without the services of 11-time NBA All-Star shooting guard Dwyane Wade, as he’s been inactive for the past two weeks with a hamstring injury.

LeBron James, who recorded his 15th double-double of the season, led the way for the Cavs against his former team with 18 points, 10 rebounds and seven assists in 31 minutes. Timofey Mozgov (20 points, seven rebounds and two blocked shots) and Tristan Thompson (17 points and eight rebounds) were huge on the night, as the two combined to shoot 16 of 19 from the floor.

“We made our mark defensively,” said James after the win. “We still have a long way to go, but I love the strides we’ve been making over the last month and a half.”

Mozgov and James got the crowd at the Q on their feet in the first quarter, as James threw down a monster one-handed alley-oop on the lob pass from Mozgov.

“When you’re the big guy, you don’t want to dribble the ball, right? It was too far for me to take it in,” said Mozgov. “It was not the best throw. It was pretty high, but he was able to get it.”

It was a very balanced night for the Cavs, as all five starters scored in double figures. Off the bench, Iman Shumpert added 13 points on five of seven shots from the floor to compliment Thompson’s superb night.

However, the Cavs got a scare early in the third quarter when Kevin Love got poked in the eye by Heat point guard Mario Chalmers, which caused him to writhe in pain on the floor. Love had 12 points, six rebounds and four assists in 20 minutes before he had to be taken to the locker room, where he was diagnosed with a right corneal abrasion.

Love’s eye looked good in locker room, but said he had blurry vision for 20-30 minutes

More updates on Love’s eye injury will be made available as soon as possible.

For the Heat, center Hassan Whiteside continued his impressive month-and-a-half span as he scored 17 points and nabbed 14 rebounds. Chalmers led Miami in scoring with 18 points, while former Cavs small forward Luol Deng had 17 points as well. Power forward Chris Bosh, who was selected to his 10th straight All-Star game, had an off-night as he shot five of 17 from the floor for 15 points.

In their highly impressive stretch of games lately, the Cavs have now won 14 of their last 15 games leading up to the All-Star break, with most of the victories coming in convincing fashion.

Up next, the Cavs will take on their conference rival Chicago Bulls (33-20) in the final NBA game before the All-Star break. The contest, being played at the United Center, is scheduled to tip off shortly after 8:00 pm ET on Thursday night and will be broadcast nationally on TNT.