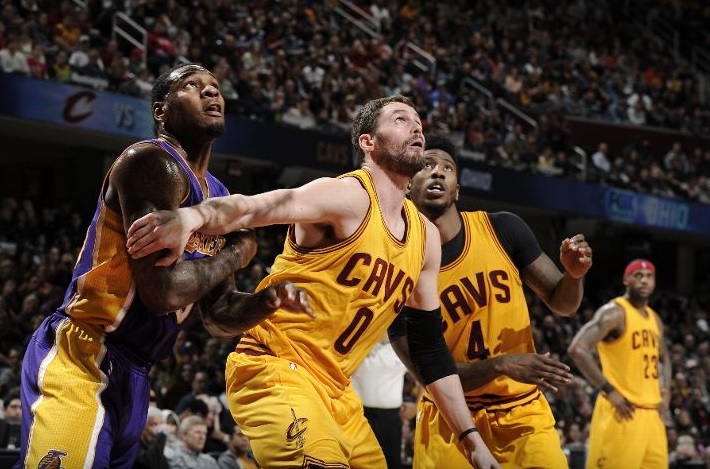 (Cleveland, OH) – Kevin Love lit up Quicken Loans Arena with a season-high 32-point performance that included seven three pointers to help the Cleveland Cavaliers get back on the winning track with a 120-105 victory over the Los Angeles Lakers on Sunday afternoon.

Love showed a solid jumper by connecting on 11 of 18 from the field, missing just one of his eight three-point attempts. He also added another double-double to his season total by grabbing 10 rebounds.

In his postgame press conference, Cleveland head coach David Blatt was asked about Love’s improvement on defense and said, “I think Kevin has had his best season defensively so far, and sometimes when that happens with a player, it takes away from their offense.”

Blatt added, “I love Kevin Love as a basketball player, and his contribution to us is vital for our success.”

Love was joined in the scoring parade by Kyrie Irving and LeBron James, who added 28 and 22 respectively to give the “Big Three” 82 on the afternoon. As a team, the Cavs finished with 18 three-pointers, one short of the team record.

James said afterward about Love’s effort, “We need to have Kev play at a high level,” then added, “When he’s on the floor, he gives us a new dynamic, but when he’s knocking down shots like that, it spreads the offense out.”

Irving was equally praiseworthy, saying, “He (Love) got it going for us and it made it easier.”

Questions about whether James would be able play after re-injuring his wrist in Friday night’s loss to the Indiana Pacers ended when he took the court to start and showed no ill-effects from the problem, also hauling down 10 boards to pick up a double-double.

The surge turned a tight 44-41 Cavalier lead with 6:07 to go before intermission into a 64-43 lead with just over a minute left. However, Los Angeles was able to put up the final six points to make it 64-49 and gain back at least some momentum. During that period, neither James nor Irving scored, but the team still shot 65 percent from the field.

After the break, the Lakers would never get any closer, with Cleveland contributing an 18-7 run that boosted their lead to 26 at 84-58 with just over seven minutes left in the quarter. James provided much of the energy during that stretch with 14 points, that included a pair of threes, but Love closed the quarter with another pair of threes to make it 96-79 in favor of the Cavs.

The fourth quarter effectively turned into garbage time for the second home game in a row as the offense of Irving and Tristan Thompson helped get the margin over 20 once again. The duo picked up the first 15 points in the quarter, while a trio of reserves closed out the team scoring with treys in the final 3:10.

At the start of the game, most of the first quarter saw neither team make much headway with five ties and 12 lead changes. For Los Angeles, their biggest advantage came with 3:33 left in the quarter following a Jordan Clarkson layup that made it 19-16.

Two minutes later, the Cavaliers began to make their move as consecutive threes from Irving turned a 24-22 deficit into a 28-24 advantage. That four-point lead would be the margin as the horn sounded to end the quarter with the Cavs up 32-28.

Cleveland looked to be taking control by scoring the first five points of the quarter, but the Lakers chipped away to get the margin to three at 44-41 midway through the stanza. Timofey Mozgov’s jump hook then started the run that put the game away.

Love talked about the team’s potential, saying, “When we’re clicking on all cylinders, we’re going to be tough to beat.”

Blatt did express irritation after the game when asked about Love’s inconsistency this season, saying, “Who gives a damn. We win 12 in a row and people are asking about his five-point game.”

Next up for the Cavaliers is a home matchup against Miami on Wednesday night to face the Heat in a game that won’t have the buildup of their first meeting. For the Cavs’ sake, they’re hoping the result is different this time and that James can stay healthy throughout the game. Tipoff will be 8 ET.