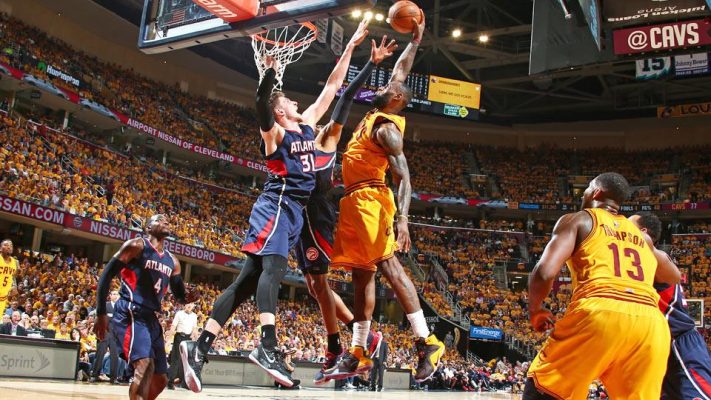 The three losses the Cleveland Cavaliers had in four meetings with the Detroit Pistons during the regular season didn’t mean a thing once their first-round playoff series began.

But barring any catastrophic injuries, past performances may indeed be a guarantee of future results in their best-of-seven matchup against the Atlanta Hawks. For that, the Cavs and their fans should be excited.

It’s tempting to look back at last year’s Eastern Conference finals when, even without Kevin Love or home-court advantage, the Cavs swept the Hawks and capped things off with a 118-88 rout at Quicken Loans Arena. LeBron James averaged more than 30 points, as well as 11 rebounds and nearly 10 assists, in a series where Kyrie Irving was available for a total of only 49 minutes over two games.

While that’s all well and good, their 3-0 record against the Hawks this season indicates the Cavs have picked up where they left off. One of those victories came in the opening month, and overtime was required the only time the two teams squared off in Atlanta. But what transpired April 11 in their most recent meeting ought to buoy the spirits of even the most hardened skeptics going into Monday night.

James went 13-of-16 from the floor in three quarters of work as the Cavs rolled to a 109-94 victory, outscoring the Hawks by a 68-49 margin in the middle two quarters alone. As was the case in the clinching game against the Pistons, James and Irving did the bulk of the damage on offense while Love was a presence inside by pulling down 14 rebounds.

Love averaged a series-high 12 rebounds in the first round, and there is no reason to doubt both he and Tristan Thompson will continue to assert themselves on the boards. As was pointed out by Terry Pluto of The Plain Dealer, the Cavs outrebounded the Hawks by almost 13 a game last spring, with Al Horford turning into a virtual non-factor.

Given the mismatch on paper, it would not be surprising to see the Hawks try to get under James’ skin like the Pistons attempted to do. But if Marcus Morris and Stanley Johnson couldn’t faze him, is there reason to believe Dennis Schroder will be any more successful?

One area which would be an understandable cause for uncertainty is how the Cavs come out for Game 1 after going more than a week without anyone to face other than themselves in practice. Recall that after sweeping Boston a year ago, they dropped the series opener at home to the Chicago Bulls, although that was a game where the Cavs were coping with the loss of Love and the suspension of J.R. Smith.

Smith, who was a sizzling 17-of-33 from three-point range against the Pistons, accounted for 16 of the Cavs’ 49 threes against the Hawks a year ago. While he is prone to stretches of inconsistency, as most outside shooters tend to be, this is the right team at the right time for him to be facing.

And when it comes to getting on the nerves of an opponent, Matthew Dellavedova pretty much wrote the book on that subject during the dismantling of the Hawks. He won’t average anywhere near 30 minutes a game this time around, simply because Irving is in much better health now. But whenever the feisty point guard is on the floor, the Hawks’ heads are bound to be on a swivel.

The Hawks are coming off a six-game series in which the Celtics put up a fight after losing Avery Bradley in the opener. As tenacious as they were at times, the Celtics managed only 72 points in Game 2, 83 points in Game 5 and 65 points through the first three quarters of Game 6. Unless the Hawks are able to ugly things up, there’s no way a team with James, Love and Irving will struggle to score in similar fashion.

The law of averages would imply the Hawks are bound to break through against the Cavs at some point. It could happen once in this series. But no more than once.