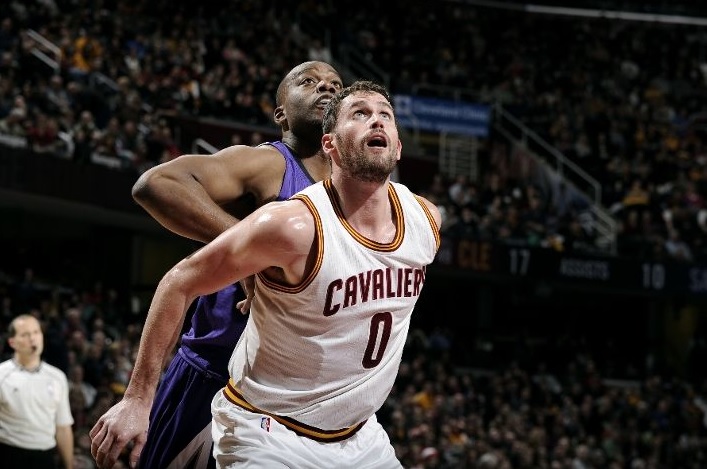 (Cleveland, OH) – After missing Wednesday night’s thrilling 99-94 victory over the Portland Trail Blazers with a sprained right wrist, LeBron James returned to action on Friday night in the Cleveland Cavaliers 101-90 win over the Sacramento Kings (16-29) at Quicken Loans Arena. The victory extended the Cavs’ season-best winning streak to nine games as they improved to a 28-20 record, while the Kings dropped their eighth game in a row.

“We’re a much more together unit with our new guys and with our originals that have really picked it up,” said Cleveland Cavaliers head coach David Blatt after his team’s victory.

James made his presence felt early as he stole the ball from the Kings on the opening possession, which resulted in a two-handed dunk for the game’s first points. Given his shot was a bit off this game, James still finished with 19 points, seven assists, four steals, three rebounds and two blocked shots.

After his superhuman 55-point performance on Wednesday night against Portland, Kyrie Irving scored a respectable 22 points on eight of 13 shots and also dished out dished assists.

In the first quarter, Kevin Love was an absolute monster as he scored 16 of his 23 total points in the game’s first 12 minutes on six of eight shots from the floor. For the game, Love also recorded yet another double-double as he grabbed 10 rebounds on the night.

“We got off to a good start as a team and never really looked back,” Love said. “Obviously, there have been ups and downs. Some of the adjustments have been tough, but as a team we’re still finding a way.”

The Cavs kept the Kings at bay for most of the game, as they led Sacramento by double digits for the entire second half after leading 55-44 at halftime. J.R. Smith continued his stellar play on offense and defense for the Cavs, scoring 16 points to go along with his five assists and four steals. Although he had the tough task to guard Kings center DeMarcus Cousins, Timofey Mozgov had a very solid game as he recorded seven points, eight rebounds and three blocked shots.

After it was announced earlier today that he would replace Kobe Bryant on the Western Conference All-Star team due to a season-ending shoulder surgery, Cousins showed his value on the court. Despite only having made five of his 17 shots on the night, Cousins finished with 21 points (11 of 12 from the free throw line), 13 rebounds, five steals and four assists.

Forward Rudy Gay added 20 points and nine rebounds, while former Cavs forward Omri Casspi added 15 points and two steals off the bench for the Kings. Although they made 27 of 32 free throws as a team, the Kings only managed to drain a dismal three of 18 shots from behind the arc on Friday night.

Up next, the Cavs will try to extend their season-best winning steak to 10 games against the Minnesota Timberwolves on Saturday night, as the game is scheduled to tip off shortly after 8:00 pm ET. Love, who played his first six seasons with the Timberwolves, is not expecting a pleasant greeting from the Minnesota faithful at Target Center.

Luckily, one of his teammates knows that situation very well and offered some harmless advice on how to handle it.

“It wont be the same as my experience, but obviously I can give him some insight: they only boo when they love you,” said James after tonight’s game.