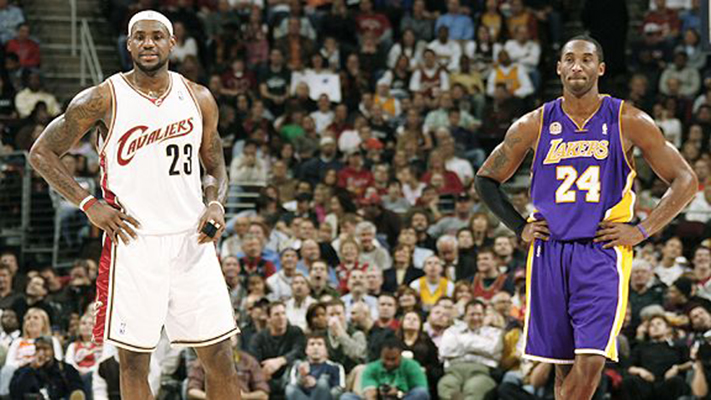 However, the Cavs are poised to right the ship with LeBron James back in the lineup as they will take on Kobe Bryant and the Los Angeles Lakers (12-27) on Thursday night at Staples Center. The game will be broadcast nationally on TNT and is scheduled to tip off shortly after 10:30 pm ET.

Bryant, at age 36, is at the tail-end of his legendary career with the Lakers but has continued to break records and pad his stats this season.

“The hard part is sitting down for stretches and then trying to get back in,” Bryant said about his current condition. “I feel like the Tin Man, you know what I mean? But that’s just part of the process, part of the challenge. It’s not something I’m whining or complaining about. I’ll just work through it and get my legs used to playing again.”

On December 14th during the Lakers’ 100-94 win over the Minnesota Timberwolves at Target Center, the five-time NBA champion passed Michael Jordan for third all-time on the NBA scoring list. Bryant currently sits alone with 32,449 points, behind only Kareem Abdul-Jabbar (38,387 points) and Karl Malone (36,928 points) on the list.

As unusual as it is to see the Lakers in such poor shape the last couple of seasons, the Cavs have fallen short of expectations themselves so far in the 2014-15 season. In his return to the lineup on Tuesday night in Phoenix after a two-week absence, James didn’t miss a beat as he led the Cavs with 33 points (11-18 from the floor), seven rebounds and five assists. Newcomer J.R. Smith also had a great night for the Cavs as he scored 29 points (10-19 from the floor with eight three pointers made) to go along with four steals.

“I thought he was terrific,” Cleveland Cavaliers head coach David Blatt said after the game on James’ performance. “It is not new for anybody. I just thought he laid it out there. That wasn’t an easy thing because he hasn’t played a competitive game in eight games. I thought he was just terrific.”

However, outside of those two guys for the Cavs, nobody else scored more than 10 points. Most notably on Tuesday night, Kyrie Irving and Kevin Love both had terrible games for their standards. Both stars scored only nine points as Irving managed to turn the ball over eight times, while Love did not play a single minute in the fourth quarter. Suns power forward Markieff Morris stole the spotlight with his spectacular performance against the Cavs, as he scored a career-high 35 points on 15-21 shots from the field.

Despite having such a subpar record on the season, the Lakers have still been able to hang tough with some of the Western Conference’s best teams for most of the game in losing efforts. With that in mind, the Cavs will definitely need to play great basketball to finally end their six-game losing streak.

1. Kyrie Irving Needs to Redeem Himself

After Tuesday’s game in which he played 44 minutes and only scored nine points to go along with eight turnovers, Irving has a golden opportunity in front of him against the Lakers. On the season, Los Angeles has been notorious for struggling defensively against opposing point guards. As Irving is one of the NBA’s elite at his respected position, Lakers point guards Ronnie Price and Jeremy Lin could be in for a very long night trying to guard him.

2. Keep Kobe Bryant and Nick Young from Putting on a Show

The Lakers are a team that is fully capable of catching fire from behind the arc. Nick Young, who’s self-proclaimed nickname is “Swaggy P,” has been one of the NBA’s most entertaining players on and off the court over the past couple seasons. Although they have been struggling as of late from the field, “Swaggy P” and Kobe Bryant are always a threat to score quickly and put up a ton of shots.

There have been a good amount of games this season where Love simply has not produced in the final 12 minutes of the game, including a few times where Love did not play a single minute of the fourth quarter. That needs to immediately change in the second half of the season, as James and Irving need Love to play to his potential in order for this team to gain confidence going forward.