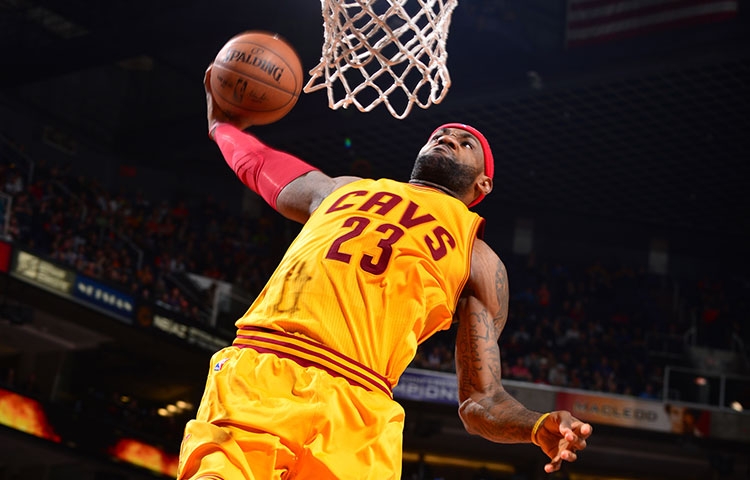 (Phoenix, AZ) – Despite a furious second-half comeback that erased a 19-point deficit, cold shooting down the stretch was fatal to the Cleveland Cavaliers as they dropped a 107-100 road contest to the Phoenix Suns on Tuesday night at the US Airways Center.

The Cavaliers charged back from an 80-61 deficit with 3:29 left in the third quarter to take a number of small fourth quarter leads, the last coming on a LeBron James layup with 3:53 to go that made it 97-96 in favor of the Cavs.

However, seven Phoenix points and five missed shots by Cleveland over nearly a three-minute stretch put the Cavaliers in a 103-97 bind with 1:09 to go in the contest. James converted a three-point play to cut the deficit in half, but free throws down the stretch by the Suns salted the game away.

Attempting to explain how the team was able to bounce back, Cleveland head coach David Blatt said, “We just picked up our defense and we matched up better.” In describing what cost the team, Blatt stated, “I thought we missed a couple of good shots and we had a couple of turnovers.”

James explained the late slide by saying, “A couple of bounces here and there and we had a couple of turnovers.”

The defeat not only sent the Cavs to their sixth straight defeat, but their ninth loss in the last 10 games, and also put them below .500 on the year at 19-20.

Phoenix held a 59-51 lead to start the second half, with the Suns continuing to boost their lead over the first nine minutes of the third quarter as the Cavaliers showed few signs of being able to combat the torrid Phoenix shooting. Kyrie Irving had started the second half scoring by connecting on a jumper, but the Suns then put together a 21-8 run to take the 80-61 lead.

At that point, the switch went on for Cleveland, which used four three-pointers from J.R. Smith in the final 2:10 to chop the margin to just six at 85-79 as the quarter ended. The offense exploded in the final minute, scoring 10 points, half of those coming in the final 5.9 seconds as James drove to the basket on a dunk. Smith then stole the inbounds pass and hit a three with two seconds remaining.

James then led the fourth quarter charge, scoring seven of the team’s first nine points to tie the game at 88 with 8:21 to go in the game. Tristan Thompson’s dunk 50 seconds later gave the Cavaliers their first lead since the opening quarter.

The Suns scored the next four points, but Irving’s three took back the lead at 93-92 with 5:29 to play. Both teams then traded leads over the next two minutes, with James’ basket at the 3:53 to mark the beginning of the end for the Cavs.

James was playing in his first game back since December 28, but showed no outward signs of rust in his nearly 37 minutes, finishing with 33 points on 11 of 18 from the field. He also added seven rebounds and five assists.

After the game, James talked about the difference between yesterday’s practice and the game, saying, “I feel better than I did two weeks ago. Yesterday, my lungs were burning, but I got my second wind today.” He also talked about his ability to move toward the basket for some huge dunks, adding, “I couldn’t have made those moves two weeks ago.”

Cavaliers fans had a brief scare in the second quarter when James went down briefly. He explained afterwards, “I got elbowed in the back of the head by P.J. Tucker.”

Joining James in the Cleveland scoring parade was Smith with 29, but Phoenix’s Markieff Morris led all scorers with 35 on the night.

The Suns held the advantage to start the game, jumping out to a 9-4 lead with 7:27 to go in the opening quarter. The Cavaliers then ran off seven unanswered points, but then watched Phoenix go on an 18-8 run to make it 28-19 with 1:24 remaining. The surge was fueled by 11 points from the Suns’ Marcus Morris.

Phoenix held a 31-24 advantage to start the second period, but after Shawn Marion’s two free throws cut the margin to five in the first 12 seconds, the Cavs would get no closer than six before halftime.

The Suns built the lead up and led by as many as 13 on two occasions, the last coming after three free throws from Isaiah Thomas with 57.1 seconds to go before intermission. Cleveland was able to run off the final five points of the quarter, the final two coming on a thundering James dunk with just 1.6 seconds remaining to make it 59-51 in favor of Phoenix after two quarters.

After coming close to collecting a double-double in the opening 24 minutes with nine points and eight rebounds, Kevin Love was held scoreless after the break and got no more rebounds in his nearly 27 minutes of court time.

Love’s absence from the lineup in the fourth quarter came up in Blatt’s postgame press conference, but he dismissed any potential issues by saying, “I didn’t see anything negative out of him.”

Despite the defeat, the Cavs held a 42-34 advantage on the boards, but 19 turnovers proved to be deadly, with Blatt saying, “Ultimately, that was the reason for the loss.”

The Cavaliers now head to the City of Angels for back-to-back contests at Staples Center on Thursday and Friday night against the Los Angeles Lakers and Los Angeles Clippers, respectively.