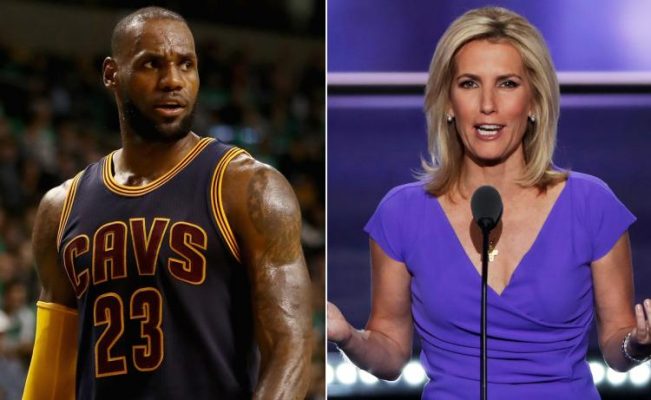 Less than a day after conservative pundit Laura Ingraham criticized political remarks by Cleveland Cavaliers forward LeBron James, the Fox News anchor issued a statement on Friday attempting to defend herself from charges that those comments were racially motivated. Those original remarks were made on her Thursday night program, “The Ingraham Angle,” with her subsequent statement released by the network:

“In 2003, I wrote a New York Times bestseller called Shut Up & Sing, in which I criticized celebrities like the Dixie Chicks & Barbra Streisand who were trashing then-President George W. Bush,” Ingraham wrote. “I have used a variation of that title for more than 15 years to respond to performers who sound off on politics. I’ve told Robert DeNiro to ‘Shut Up & Act,’ Jimmy Kimmel to ‘Shut Up & Make Us Laugh,’ and just this week told the San Antonio Spurs’ Gregg Popovich to ‘Shut up & Coach.’ If pro athletes and entertainers want to freelance as political pundits, then they should not be surprised when they’re called out for insulting politicians. There was no racial intent in my remarks – false, defamatory charges of racism are a transparent attempt to immunize entertainment and sports elites from scrutiny and criticism. Additionally, we stated on my show that these comments came from an ESPN podcast, which was not the case – the content was unaffiliated with ESPN.”

Those original remarks by Ingraham, among other criticisms, stated that James was “ignorant” for having verbally attacked President Donald Trump in a video that was posted on the 15-year veteran’s “Uninterrupted ” online platform. James indicated in the video that Trump lacks empathy for the people he’s spoken about supporting, the latest in a series of withering criticisms of Trump by James.

Missing from Ingraham’s statement are instances where she was critical of athletes or entertainers who had spoken with her or other conservative commentators and had criticized past Democratic presidents, such as Barack Obama or Bill Clinton.

James will likely be asked questions about the controversy on Saturday during the media day session for Sunday night’s All-Star Game. As of Friday afternoon, he’s offered no response to Ingraham’s remarks.