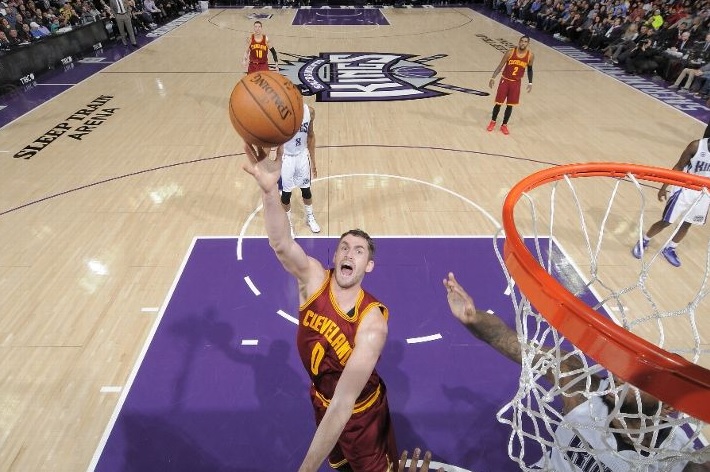 (Sacramento, CA) – Game after game, LeBron James‘ importance to the Cleveland Cavaliers becomes just that much more evident. Sunday night’s debacle, a 103-84 loss to the Sacramento Kings at Sleep Train Arena, was another example of how much James has been missed by the Cavs.

The Cavs fell to a dismal 1-8 on the season without James in the lineup, as he has been inactive due to a left knee and lower back strain. Luckily for Cavs fans, the team has targeted Thursday’s game against the Los Angeles Lakers at Staples Center for James to make his return to the lineup.

Just like on Friday night’s game against the Golden State Warriors, the Cavs had another very productive first quarter of the game against the Sacramento Kings. Kyrie Irving, who scored 14 of his 21 total points in the first quarter, hit four three pointers in the game’s first 12 minutes, including three shots from behind the arc in a span of 1:06.

Kings center DeMarcus Cousins, who averages an outstanding 23.8 points and 12.3 rebounds per game in the 2014-2015 season, had another typical day at the office on Sunday. His 26 points (11-23 shooting) led all scorers, while he also added 13 rebounds, five assists, four steals and three blocks. Kings small forward Rudy Gay added 23 points, while Kings point guard Darren Collison also contributed to his team as he added 16 points and six assists.

On the night, the Cavs turned the ball over 14 times compared to only four turnovers for the Kings. Also, for the second straight game, the Cavs were only able to muster five fast-break points in Sunday night’s contest.

For the Cavs, Kevin Love put forth a strong effort as he recorded yet another double-double with 25 points, 10 rebounds and three assists. Timofey Mozgov, who played in only his second game for the Cavs, made his first start on the season. He recorded a double-double as well with 14 points and 12 rebounds on Sunday night.

However, eyebrows were raised in a post-game interview between Cleveland Cavaliers head coach David Blatt and a reporter. When a reporter made a comment, “Kyrie Irving, Kevin Love they are two max players, they’re here,” in reference to the Cavs struggling even with max-contract players outside of James, Blatt immediately responded, “Kevin’s not a max player yet,” since Love will be an unrestricted free agent this upcoming offseason.

After the defeat to the Kings, the Cavs have now lost nine of their last 11 games to drop them to 19-19 on the season. Next on their West Coast road trip, the Cavs will travel to play the Phoenix Suns at US Airways Center. The game is scheduled to tip off shortly after 9:00 pm ET on Tuesday night.