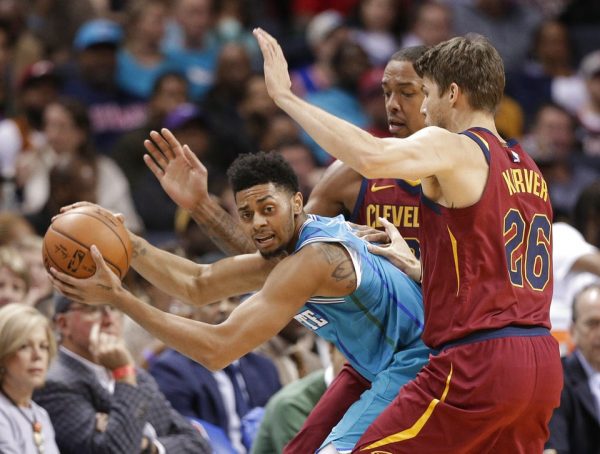 (Charlotte, NC) — The combination of 31 points from LeBron James and solid second-half defense helped the Cleveland Cavaliers notch their third consecutive victory with a 115-107 win over the Charlotte Hornets at Spectrum Center on Wednesday night. The victory now elevates the Cavs above the .500 mark at 8-7 on the year and gives them a 3-1 record on their four-game road trip.

The Cavaliers held the Hornets to just 40 second-half points after giving up 67 during the first half. The contrast didn’t go unnoticed by James:

“That was the biggest difference in the game,” James said. “We were in tune and we executed.”

“In the second half, holding a team like this to 40 points is a good job,” Lue said.

Applying some solid defense during the third quarter, the Cavaliers held the Hornets to just 28 percent shooting from the field during those 12 minutes. The entire period was tightly contested, with both teams taking turns with the lead. When the horn had sounded, the Cavs held a four-point advantage at 88-84.

“We just picked it up on both ends,” Love said about the second-half defensive effort. “Coming off that (New York) Knicks game, having great momentum, especially in that second half. We felt like we could do that tonight and we did.”

During the final period, the Cavaliers stayed in the lead for the entire quarter. At one point they boosted their lead to as many as 10 points, then put the Hornets away in the closing moments. One of the keys in ending those comeback hopes were the last of James’ points on the night. With just over three minutes left, he stole a Charlotte pass at midcourt and delivered a thundering dunk to give the Cavs a 111-102 lead.

“I saw the pass before it happened and got the pick-six,” James said, invoking football terminology to describe his big steal.

In addition to James’ point production, he also handed out eight assists and grabbed six boards. Meanwhile, Kevin Love picked up another double-double with 22 points and 10 rebounds, while the duo of Jeff Green and Kyle Korver contributed a combined 24 points off the bench. Green tossed in 13 points and Korver 11 on the night, with J.R. Smith the only other Cavalier in double figures with 10 points. Channing Frye had another solid night with nine points and eight rebounds.

“I’m just so happy to be playing, I don’t care what you have me doing,” Frye said. “I just want to help the team win. I’m not here to get stats. The only stat I care about is defense and eating glass like a magician.”

In the beginning, the Hornets scored the first basket of the game, and then the Cavaliers went on a 19-6 run. However, that surge was short-lived because Charlotte ran off 13 unanswered points to tie the game and eventually took a one-point lead. Powered by a combined 23 points in the quarter from James and Love, the Cavs recovered to hold a 36-30 lead by the end of the first period.

That lead would evaporate during the second quarter under the weight of 34 percent shooting from the field by the Cavaliers and continued defensive lapses that allowed the Hornets to score countless easy baskets. The Cavs had hit 5-of-9 from deep during the first quarter, but managed to connect on just 1-of-11 tries in the second period. Charlotte would lead by as many eight following a 16-7 run late in the quarter and had held a 67-61 advantage at the break.

“Going 3-1 on this road trip was great,” Lue said. “We got better on offense, we got better on defense. We just gotta keep plugging away and see what happens.”

The Cavaliers return home on Friday night for a matchup against the Los Angeles Clippers. Tipoff for that game is set for just after 7:30 p.m. ET.