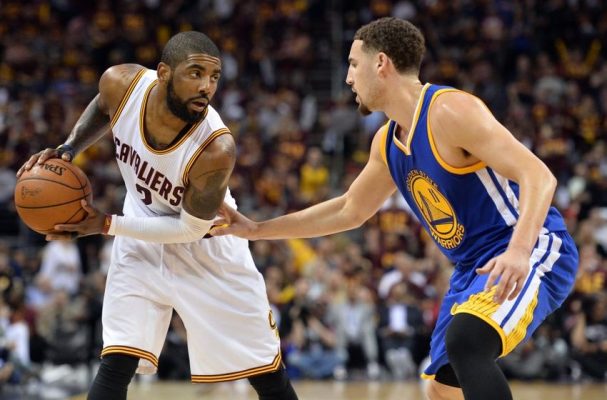 (Oakland, CA) – After a sensational 38-point performance from Kyrie Irving in Wednesday night’s 105-93 loss to the Houston Rockets at Quicken Loans Arena, the Cleveland Cavaliers (19-17) head to the West Coast to begin a five-game road trip.

On their first stop out west, the Cavs will play the Golden State Warriors (28-5) at Oracle Arena in Oakland, CA on Friday night. The game is scheduled to tip off shortly after 10:30 pm ET and will be shown nationally on ESPN.

Under first-year head coach Steve Kerr, the Warriors have the league’s best record and highest scoring average per game. The Warriors have lost only one home game during the entire 2014-2015 regular season and are currently on a 13-game winning streak at Oracle Arena.

“It will be a tough trip, but on the other hand I think it will be an opportunity for us to get a lot of work done and to incorporate our new players,” said Cavaliers head coach David Blatt on the team’s upcoming road trip.

The Cavs are expecting their new 7-foot-1, 250-pound center Timofey Mozgov to contribute immediately. After being acquired from the Denver Nuggets for two first-round picks, Mozgov has a chance to reunite with Blatt, who was his coach on the Russian national team in the 2012 Summer Olympics in London.

“(Mozgov is a) very active big guy,” said coach Blatt on the acquisition of Mozgov. “He’s a rim protector, which we’ve been looking for. He runs the court extremely well. He’s a great pick-and-cut player, which is extremely helpful in our offense. Timofey is unique with his size, length and agility.”

As his knee and back injuries continue to heal, LeBron James will likely be held from playing until next Thursday night’s game against the Los Angeles Lakers at Staples Center. Although the Cavs will not have the NBA’s best all-around player on Friday night, they will need Irving and Kevin Love to have stellar performances in order to keep pace with the Warriors’ offensive firepower.

With arguably the NBA’s most dangerous backcourt tandem in All-Star point guard Stephen Curry and shooting guard Klay Thompson, the Warriors possess the ability to score a lot of points in a short period of time. Curry and Thompson, nicknamed the “Splash Brothers” due to their elite ability to drain three pointers, currently average 22.9 points per game and 21.6 points per game respectively.

On Wednesday night, Curry and Thompson showed off their dynamic abilities in Golden State’s 117-102 victory over the Indiana Pacers. Thompson scored 27 of his 40 points in the second half of the victory, but it was Curry who made NBA history. After he sank a trey in the first quarter of the game, Curry became the fastest player ever to make 1,000 career three pointers as he reached the milestone in 88 fewer games than second-place Dennis Scott.

In addition to the backcourt tandem of Curry and Thompson, Golden State also has a solid front court and exceptional bench unit. As of late, Warriors center Marreese Speights and forward Draymond Green have taken advantage of their opportunities in the front court. Green has averaged 11.0 points, 10.8 rebounds, 2.5 steals and 2.5 blocks in the Warriors’ last four games, while Speights has averaged 18.3 points per game in that span.

Speights eased into a starting role over the past six games in place of center Andrew Bogut, who returned Wednesday night after a 12-game absence due to a right knee injury.

Off the bench, Warriors two-time all-star power forward David Lee has averaged 10.6 points and 5.8 rebounds in his last nine games after a hamstring injury kept him out of the lineup for 24 of the season’s first 25 games. Guard/forward Andre Iguodala, also a former all-star in 2012, has adapted to his role as a 6th man this season for the first time in his successful 11-year NBA career. He has provided defensive prowess and leadership off the bench to go along with 6.9 points per game, which is less than half of his 14.3 career average.

The “Splash Brothers” seem to make their jump shots look so effortless, especially from behind the arc. In order to stand a chance against the the league-best Warriors and achieve a victory without James on Friday night, the Cavs must play superb perimeter defense.

2. Get Timofey Mozgov comfortable with his new teammates and coaches

During the time he played for the Nuggets from February 2011 to January 2015, Mozgov had plenty of experience against Western Conference teams, which will help the Cavs on their five-game West Coast road trip. He should be able to fulfill the true center role, which has been an issue since Anderson Varejao‘s season-ending achilles injury on December 23rd against the Minnesota Timberwolves. Fun fact: late in the 2013-2014 season on April 10th, 2014, Mozgov scored 23 points and had an astounding 29 rebounds in a game against, you guessed it, the Golden State Warriors at Oracle Arena.

3. Don’t be careless with the basketball on offense

Although the Cavs have been pretty solid in avoiding a surplus of turnovers this season, they’re in for a challenge in Friday night’s game. The Warriors are currently tied for first in the Western Conference with the Dallas Mavericks in forcing opponent turnovers at 15.7 per game. With his ability to consistently pressure opposing point guards, Curry is the league-leader in steals with 2.21 per game.