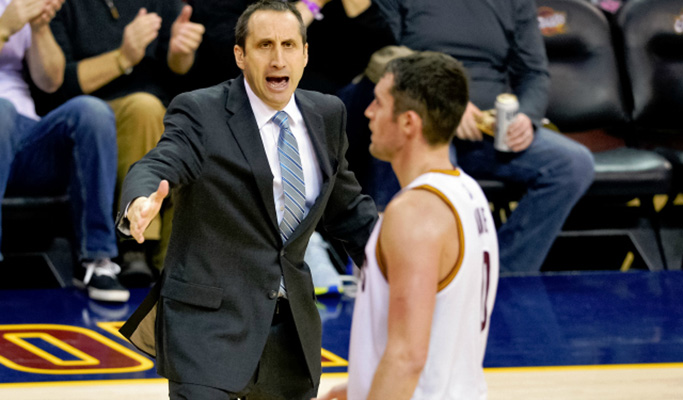 With the Cleveland Cavaliers continuing to struggle without LeBron James in the lineup, Kevin Love’s status next year inadvertently became part of the postgame story after the Cavaliers dropped a 103-84 road decision to the Sacramento Kings on Sunday night.

Cleveland head coach David Blatt was asked by a reporter after the game why the team has continued to stumble despite having two players in the lineup like Love and Kyrie Irving, who, in the reporter’s words, “are max players,” as in making a maximum salary.

A frustrated Blatt responded by saying, “Well, Kev’s not a max player yet, is he?”

Love’s current deal has him making $16.74 million in the third season of a four-year $60.8 million deal he signed with his former team, the Minnesota Timberwolves, back in 2012. Love is making the highest amount possible, but the definition of a maximum deal is for five years or more.

Despite Blatt’s literal interpretation of Love’s current contract, his comment was perceived by some as a slap at the seven-year forward, with Sports Illustrated writing that, “Blatt is not that impressed with the way his big man Kevin Love has been playing.” Others like the New York Post, wrote that Blatt’s words may have been an attempt at motivating Love.

Due to an opt-out clause in his contract, Love is expected to sign a new long-term deal after this season with the Cavaliers. With the new broadcasting contract signed by the NBA boosting the salary cap for each team, Love and others (like James) will be the beneficiaries of much more lucrative deals.

Given that Love can’t officially be signed to a long-term deal until this July, much continues to be made (almost exclusively from media outside of the Cleveland area) about the fact that the Cavs could lose the power forward to a team on the West Coast, where he lives during the offseason and where he grew up.

Love has made numerous statements over the past few months that he plans to sign a long-term deal with Cleveland. However, the team’s 19-19 record and his perceived sensitivity to slights (alleged or otherwise), have given media plenty of ammunition to fire at the team for their disappointing start. They’re also offering a worst-case scenario of the Cavaliers losing Love after just one year after giving up two top NBA Draft selections in Andrew Wiggins and Anthony Bennett to get him.

The Cavaliers hit the midway point of their five-game Western road trip with a game against the Phoenix Suns on Tuesday night beginning at 9 pm ET.