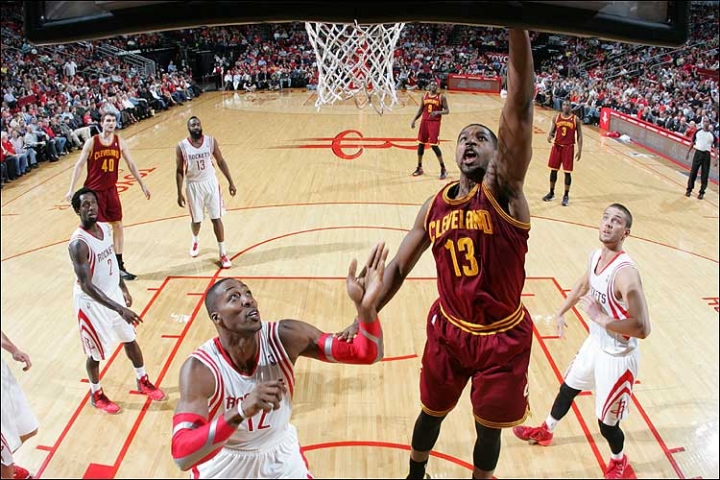 (Cleveland, OH) – After suffering their most embarrassing defeat, a 95-92 loss to the Philadelphia 76ers at Wells Fargo Arena, the Cleveland Cavaliers (19-16) are back home as they host the Houston Rockets (23-11) at Quicken Loans Arena. The game is slated to tip off shortly after 7:00 pm ET and can be seen nationally on ESPN.

Unfortunately, the Cavaliers have been ravaged by injuries as of late. Against the 76ers, the Cavs were without LeBron James (knee/back), Kyrie Irving (back), Anderson Varejao (torn Achilles), and Dion Waiters.

Good news for Cavs fans, however, Ethan J. Skolnick of Bleacher Report has reported that Irving will play in tonight’s game against the Rockets.

As Cavaliers Nation found out on Monday, Waiters was involved in a three-team trade with the Oklahoma City Thunder and New York Knicks that sent Waiters to the Thunder and brought guards J.R. Smith and Iman Shumpert from the Knicks.

“I’m really excited. J.R. and Iman can bring a different dynamic to our team,” said Tristan Thompson on his new Cavaliers teammates. “Iman’s defensive ability and tenacity, and J.R. has been in this league for 10 years, been able to score and played in big moments. Adding those guys to our team is definitely gonna take steps in the right direction.”

The Cavs have not had much to smile about lately, losing six of their last eight games including three consecutive blowout losses that have been by at least 16 points. However, Cleveland should be getting a boost tonight as Irving returns to the lineup.

Rockets all-star shooting guard James Harden will be a massive headache to defend for the Cavs as he is leading the league in scoring with 27 points per game. All-Star center Dwight Howard will also be a matchup nightmare as he is averaging 17.8 points along with 11.5 rebounds per game.

Recently, the Rockets have become even more dangerous with the additions of former Pistons forward Josh Smith and former Timberwolves guard Corey Brewer.

“They’re very tough and they’re a big team,” said Love on facing the Rockets tonight. “We obviously know what they have with Harden, who’s a tough player to guard because he gets into the lane and to the free throw line I think more than anyone in the league. We’re going to have to take away from him as much as we can.”

There is no doubt in anyone’s mind that Harden can score at will. He excels at attacking the basket and leads the league in free throws made while also being top 10 in three pointers made with 85 on the season. However, Harden also leads the league in a statistic the Cavs must take advantage of: turnovers. Harden’s 133 turnovers so far in the season ranks first in the NBA, and forcing him to make mistakes will throw off the Rockets’ rhythm.

2. Get physical with Dwight Howard.

Although the Cavs are lacking a true center in their rotation right now, Kevin Love and Tristan Thompson need to get extremely physical in the post with Dwight Howard. Second chance points are key, as Thompson is near the top in the NBA when it comes to offensive rebounding.

3. Get accustomed to new faces in the locker room.

Cavs doctors will likely hold Iman Shumpert out two weeks so his dislocated shoulder can heal properly while J.R. Smith will likely be active for the Cavs tonight, but it is unknown how much playing time head coach David Blatt will give him. Smith is a scoring specialist that will provide the Cavs with more offensive firepower while LeBron James is inactive.