Cavs News: LeBron James to Miss Next Two Weeks Due to Knee, Back Injuries 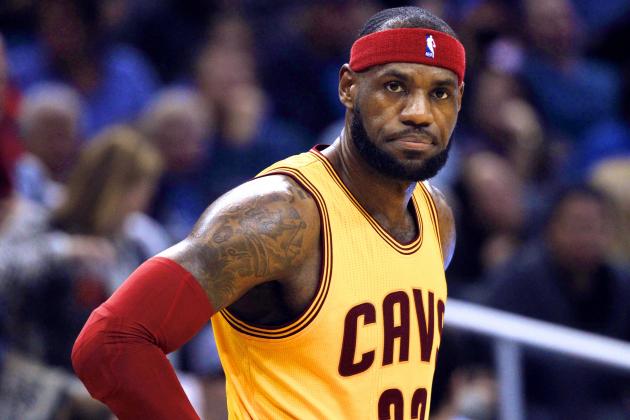 As if the past week wasn’t bad enough regarding injuries to the Cleveland Cavaliers, 2015 began in similar fashion when ESPN.com reported that LeBron James will miss the next two weeks of action due to strains of both his left knee and lower back.

Most consecutive games LeBron had missed in career was 5 for a finger injury in 2007-08. Now will be out 2 weeks with knee/back issues

Cleveland announced the MRI results and said that James would begin undergoing treatment that includes anti-inflammatories. He aggravated the knee on Christmas Day when he jumped over courtside seats during a road loss to the Miami Heat.

Regarding the troublesome knee, James said on Wednesday that it has been hurting for much of this season. “I’ve been playing with it, and it goes away and comes back,” said James, who has never missed more than five consecutive games in his 12-year NBA career.

James has missed the past two games for the Cavaliers against the Atlanta Hawks and Milwaukee Bucks, both losing efforts for the 18-14 team. He also sat out the December 11 loss to the Oklahoma City Thunder due to the knee issue.

James’ absence over the next two weeks will include four games in the next week and much of the team’s five-game Western road swing that begins a week from Friday against the Golden State Warriors.

Since their December 23 win over the Minnesota Timberwolves, the Cavs have lost veteran center Anderson Varejao to a season-ending Achilles tear, Shawn Marion to a sprained ankle suffered in a December 28 loss to the Detroit Pistons and Kevin Love to back spasms in a loss to the Hawks two nights later. Their lone win in the last five games came in a road win against the Orlando Magic on December 26.

The Cavaliers are traveling to Charlotte on New Years’ Day to take on the Hornets in a 7 pm ET matchup on Friday night.