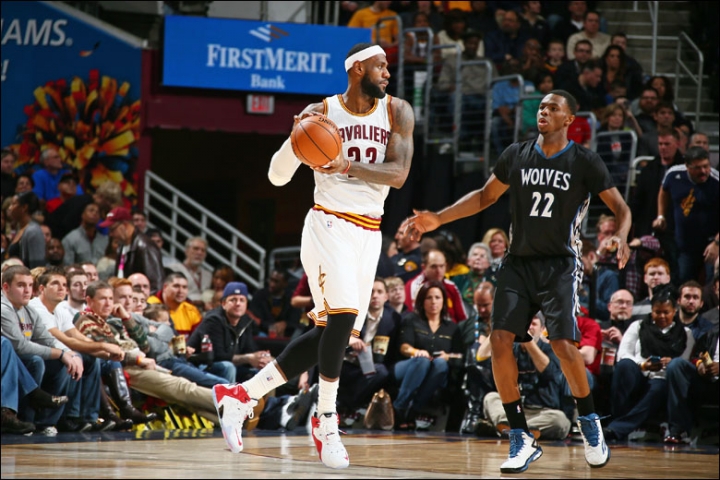 (Cleveland, OH) – Up until nearly nine minutes into the third quarter, the Minnesota Timberwolves had kept it relatively close with the Cleveland Cavaliers. However, the Cavs pulled away and never looked back in a 125-104 domination of the Timberwolves on Tuesday night at Quicken Loans Arena.

The Cavs may have suffered a critical loss to their starting center Anderson Varejao, who appeared to suffer a left leg/ankle injury with 7:24 left in the third quarter. He was unable to put any weight on his left leg as his teammates helped carry him off the court. Varejao will be evaluated further tonight and on Wednesday once the swelling goes down.

Cavaliers head coach David Blatt said on Varejao’s injury, “We’re going to have to wait and get him evaluated by doctors and we’ll see what’s going on. We really don’t know.”

Kyrie Irving led the Cavs in scoring with 29 points in his best offensive game in three weeks. He also added four assists and three steals to his stellar night, in which he shot 12 of 18 from the floor.

LeBron James had another typical day at the office by adding 24 points, and Kevin Love recorded a double-double with 20 points and 10 rebounds against his former team.

In his return to the team that drafted him #1 overall in the 2014 NBA Draft, Minnesota Timberwolves rookie Andrew Wiggins had one of the best games of his young career. Wiggins had 27 points (nine of 16 shooting) and hit all three attempts from behind the arc.

Forward Shabazz Muhammad added 18 points on seven of 17 shooting from the floor. While Wolves center Gorgui Dieng was another bright spot as he recorded a double-double on the night with 20 points to go along with 12 rebounds, four blocks and three steals.

“I’m not used to being happy for guys who play well against us, but given that we won, I’m happy for him,” said Blatt on the performance of Wiggins.

Trailing 64-56 at halftime, the Wolves were able to keep themselves within striking distance well into the third quarter. They cut the Cavs’ lead down to 80-78 with 3:34 remaining in the stanza. But after that, the Cavs never looked back and finished the quarter on a 16-1 run to lead the Wolves 96-79.

LeBron added an exclamation point near the end of the period by draining a deep 30-foot three pointer with 1:31 remaining.

Shooting guard Dion Waiters had another solid game off the bench, scoring 19 points on five of 12 shooting. Waiters also had three steals and made seven of his eight free throw attempts. Shawn Marion contributed with 11 points in 26 minutes off the bench.

Once the Cavs pulled away at the end of the third quarter and into the fourth quarter, coach Blatt emptied out his bench. All 13 players that were eligible to play for the Cavs got to play at least three minutes in the ball game.

Wolves point guard Mo Williams, who was a big part of the Cavaliers’ success in the team amassing 127 total wins combined during the 2008-2009 and 2009-2010 seasons, led both teams in assists with seven on the night.

With the victory, the Cavaliers improved their record to 17-10 on the season as the injury-ravaged Timberwolves fell to a dismal 5-22 record.

The Cavs will travel to play the Miami Heat (13-16) on Christmas Day at American Airlines Arena. The Heat are coming off an extremely embarrassing home loss to the Philadelphia 76ers, who came in to that game with a 3-23 record. The Heat were outscored 18-9 in the fourth quarter of their 91-87 loss to the 76ers on Tuesday night.