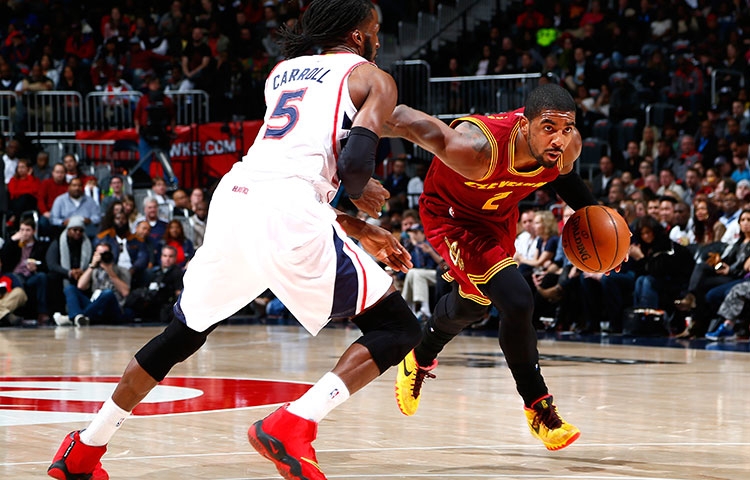 (Atlanta, GA) – Although they put up a valiant effort against one of the NBA’s hottest teams, the Cleveland Cavaliers were edged 109-101 on Tuesday night at Philips Arena by the Atlanta Hawks.

“I didn’t feel a necessity to talk to the guys about that because that’s simply not the case,” Blatt said. “And just because things are reported or said, it doesn’t mean that they’re true.”

On LeBron James‘ 30th birthday, it was decided to be best that he not play due to left knee soreness. Also inactive for the Cavs was Shawn Marion with a left ankle injury.

The Cavs suffered another blow in the third quarter as Kevin Love exited the game with back spasms. In only 24 minutes, Love was having a very poor game as he only made one of his eight shots en route to seven points and seven rebounds.

“We just all need to stop fighting this battle of attrition and all get back on the court,” said Love regarding the team’s recent health issues.

Despite being extremely short-handed, the Cavs managed to rally from a 17-point third quarter deficit. With 4:43 remaining in the fourth frame, James Jones drilled his third three pointer of the night as the Cavs cut the Hawks lead to 95-93. However, this was the closest the Cavs came to retaking a lead as the Hawks remained in control the rest of the game.

Knowing someone had to step up with all the injuries, Kyrie Irving rose to the challenge as he had 35 points on 13 of 27 from the floor, nine assists and six rebounds. Tristan Thompson had another double-double with 18 points and 13 rebounds, and Joe Harris was a pleasant surprise as he had a career high in scoring with 13 points.

“Kyrie Irving was really, really hard to guard,” praised Atlanta Hawks head coach Mike Budenholzer on Irving’s standout performance. “He put them on his back.”

After being held scoreless by the Hawks for the first 3:16 of the game, Irving finally got the Cavs on the board. He banked in a three pointer as he was being fouled by Hawks forward DeMarre Carroll. Irving managed to score 10 of his 35 points in the first quarter.

Down 51-41 at halftime, the Cavs came out flat in the third yet again. The Hawks quickly jumped out to a 60-43 lead and coach Blatt did not hesitate to call a timeout right away. However, the Cavs turned things around as they ended the third quarter only down 78-73 to the Hawks.

Really good teams know how to close out victories, and that is exactly what the Hawks did on Tuesday night. Hawks point guard Jeff Teague was brilliant on the night, scoring 23 points to go along with 11 assists and five rebounds. Forward Paul Millsap was especially clutch down the stretch, scoring 10 of his 26 total points on the night in the final 5:16 of the game to go along with nine rebounds, three blocks and two steals.

Both teams combined for a whopping 60 three-point attempts on the night, with Cleveland making 13 threes and Atlanta making 10 threes. Hawks guard Kyle Korver again showed why he leads the NBA in three-point percentage, sinking five of his eight attempts from behind the arc as he accumulated 19 points and eight rebounds.

Up next, the Cleveland Cavaliers (18-13) travel back home to Quicken Loans Arena as they are set to host the Milwaukee Bucks (16-16) on Wednesday night to wrap up 2014. The game is slated to tip off shortly after 7:00 pm ET.