Cavaliers vs. Wizards Game Recap: And The Process Continues 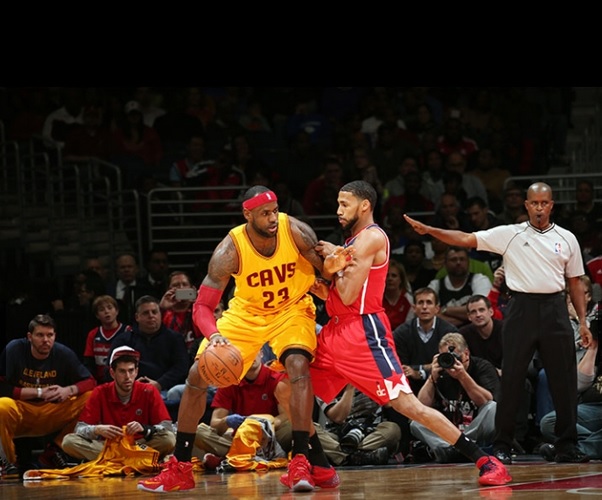 (Washington, DC) — Another sluggish performance for the Cleveland Cavaliers helped send the team to its third consecutive defeat with a 91-78 road loss against the Washington Wizards on Friday night at the Verizon Center.

The Cavs had more turnovers (19) than assists (13), with another late slide in the first quarter giving Washington a lead they would hold for the rest of the game. In addition, they shot just 36 percent from the field, not making any field goals in the final nine minutes of the game, while contributions from the Cleveland bench were minimal on the scoring side. Three players combined for nine points in that area, though Tristan Thompson hauled down eight rebounds.

Cavs Head Coach David Blatt acknowledged the team’s problems after the game saying, “Right now, we’re struggling, we’re in the dark. We have to find our way out.” He added soon afterward, “I’m concerned about everything.”

LeBron James put it simply by noting, “No one feels sorry for us in this, we have to figure it out, what it takes to win.”

In the opening moments of the game, the Wizards’ Paul Pierce hit a jumper with 8:23 to go in the opening quarter to make it 8-5 in favor of the home team. The Cavaliers countered by running off eight unanswered points, as James contributed six of those points.

Cleveland short-circuited in the final moments of the first after James’ layup gave them a 21-17 advantage with 2:40 to go. For the remainder of the stanza, Washington ran off nine straight points, the last two coming on a putback by Otto Porter with just 1.8 seconds left to give the Wizards a five-point lead.

In the second quarter, the Cavs weren’t able to get any closer than five during the entire period. Kyrie Irving hit on both ends of his free throws to make it 32-27 with 8:38 to go before halftime, but Washington pushed the lead up to 13 at 48-35.

The Cavaliers chipped that deficit down to nine on a pair of Shawn Marion free throws with 1:12 left before intermission, but the Wizards left the court with a 13-point advantage with a pair of field goals in the final minute for a 55-42 lead.

In that first half, the Cleveland bench was held scoreless, while Washington tallied 29 points, led by 12 from Kevin Seraphin. As a team, the Cavs committed 12 turnovers, compared to just six for the Wizards.

Starting the second half, the Cavaliers fluctuated from bad to good before reverting back to bad again. Trailing by 15 within the first 30 seconds of the third quarter, Cleveland was able to whittle the margin to as low as seven at 60-53 following a reverse layup from Anderson Varejao with 8:32 remaining.

Washington answered with a 12-3 run over the next five minutes, which boosted their lead back up to 16 at 72-56. That would keep the margin in double digits for the rest of the quarter, closing it out with a John Wall layup with 27.3 seconds to go for an 80-65 lead with 12 minutes to play. Those last two points gave Wall 17 for the quarter among his game-high 28 points for the game.

The Cavs were able to slightly reduce the deficit to 12 at 84-72 on a Mike Miller three-pointer with 9:16 to go. For the rest of the contest, Cleveland’s scoring consisted of three free throws from James, a pair from Thompson and one from Irving.

Any remote chance of another late comeback died with 1:25 remaining when Bradley Beal connected on a three from the left corner to make it 89-77 in favor of the Wizards. Beal was playing just his second game of the year after returning from a wrist injury.

Irving spoke about the fourth quarter struggles after the game noting, “We fought back in the fourth quarter, but the ball just wasn’t going in.” In reference to the pending back-to-back against another first place team, “We have to fight off things quickly. Right now, we don’t have the luxury of taking plays off.”

Blatt challenged his team in postgame comments saying, “Guys have to take a good look in the mirror.” He then used a football expression to explain the team’s current approach: “Gain a yard at a time. That’s what we need to do.”

James commented about the loss, “Right now, I’m frustrated. Tomorrow, I’ll be okay. Tomorrow’s another day to write another newspaper.”

James and Irving paced the Cavaliers with 22 points apiece, with Varejao narrowly missing a double double with 10 points and nine rebounds.

The Cavaliers have little time to think about this latest defeat, with another first place team on tap for tomorrow night. The Toronto Raptors, leaders of the NBA Atlantic Division will travel to Quicken Loans Arena to battle the Cavs in a 7:30 matchup.