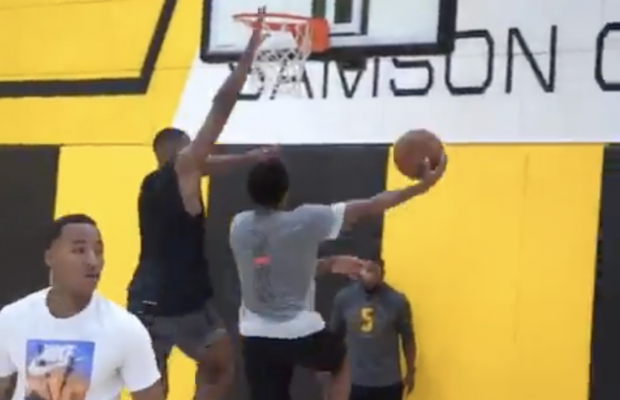 In approximately one month, Cleveland Cavaliers rookie guard Darius Garland will begin his first NBA training camp, but he’s not wasting time getting prepared for that challenge.

During a recent offseason scrimmage, he drained an impressive number of shots from beyond the arc. He also put on an array of impressive moves that helped him get to the basket. Some of those moves were against Cavs teammate and NBA veteran Tristan Thompson.

Garland’s skills were on display during his time training with Chris Johnson Hoops, which is run by Johnson, an NBA skills development trainer. A number experienced NBA players were also taking part in the Los Angeles-based competition, including Ben Simmons, Devin Booker, and Andrew Wiggins.

Chosen by the Cavaliers with the fifth overall selection in June’s draft, Garland only competed in five games at Vanderbilt University before being lost for the season with a knee injury. However, during that brief time on the court, he displayed some of the skills the Cavs are prepared to take advantage of in the years ahead.

Garland averaged 16.2 points, 3.8 rebounds, and 2.6 assists during his time with the Commodores, with his shooting touch helping him stand out. The 19-year-old connected on 53.7 percent of his shots from the field, with his flair for knocking down long-range shots one of the more notable aspects of his game. In the area of 3-pointers, he hit on 11-of-23 of his attempts.

Of course, collegiate ball and casual summer action don’t serve as a strong litmus test as to whether Garland can deliver once the regular season begins.

However, for now, he’s giving every indication that he has the ability to achieve the promising future the Cavs were expecting when they selected him two months ago.